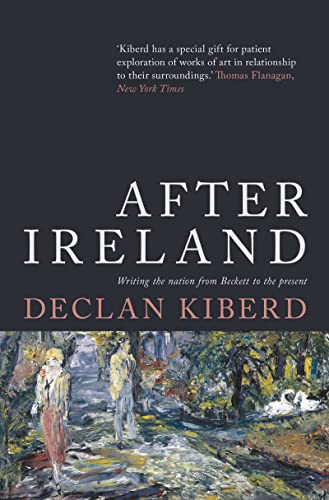 A magisterial survey of the ways in which postwar Irish writers have witnessed the frustration of the promise of Irish independence.

After Ireland: Writing the Nation from Beckett to the Present Declan Kiberd

Ireland is suffering a crisis of authority. Catholic Church scandals, political corruption, and economic collapse have shaken the Irish people's faith in their institutions. The nation's struggle for independence is thrown into doubt. But, as Declan Kiberd argues in this engaging survey of post-war Irish literature, the country's creative writers have been alert to this reality from the start.

He describes the young Samuel Beckett witnessing the burning of Dublin in 1916 and realising that 'the birth of a nation might also seal its doom.' Surveying thirty works by modern Irish writers, Kiberd traces the response to the crisis of Irish Statehood in the work of Seamus Heaney, Edna O'Brien, Joseph O'Connor, Tom Murphy, Nuala Ni Dhomhnaill, Derek Mahon and John Banville, among others. Placing these writers at the centre of Ireland's on-going exploration of the true meaning of freedom, Kiberd shows how Irish artists preserve and extend a humane culture that imagines a renewed, more plural and open nation.

Kiberd's Inventing Ireland, originally published in 1995 is a dazzlingly ambitious critical history of modern Irish literature and the standard work on the Irish Literary Revival. In After Ireland, Kiberd responds to the next generation of Irish writers, in this second renaissance of Irish literature.

'A perceptive, capacious account of life and letters since 1945' John Kerrigan's Book of the Year, TLS.
'Clearly the work of both a major intellectual and a sincere patriot who cares deeply about his country' Sunday Business Post.
'What makes After Ireland such a thoroughly engaging read is Kiberd's enthusiasm for each writer's work he is appraising: most notably in his brilliant dissection of what I would term the grade-A wordsmiths' Irish Independent.
'Kiberd is one of the foremost Irish historians of our times, so it's a pleasure to see him throw himself headlong into an examination of the ways in which post-war Irish writers have dealt with Irish statehood ... A more academic choice than some on this list, perhaps, but no less worthy or illuminating for all that' Sunday Business Post.
'A bravura survey of how post-war Irish writers have witnessed the frustration of the promise of Irish independence' Tablet.
'We are indebted to Kiberd for a fascinating exploration of Irish writing read against a palette of socio-political ideas and sometimes surprising insights that connect the work of a disparate selection of authors' Books Ireland.
'A major contribution indispensable to contemporary Irish writing' Michael D. Higgins.
'Kiberd's narrative is so engagingly written that he carries the reader along with him, especially in the literary analysis, which is executed with characteristic bravura and verve ... Magisterial' TLS.
'Couching academic critiques in accessible prose, Kiberd is a brilliant essayist, unafraid of seeming idiosyncratic or contentious as he dissects a nation's history and artistic soul' Herald.
'The newly published book by respected historian Declan Kiberd examines the state of contemporary Ireland as seen through the eyes of its writers' Irish Post.

Declan Kiberd is the author of Inventing Ireland, Ulysses and Us and Irish Classics. He has won many literary prizes. He is currently Professor of English at the University of Notre Dame in the USA.