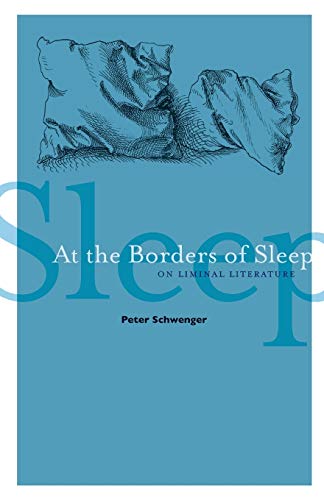 At the Borders of Sleep Peter Schwenger

At the Borders of Sleep: On Liminal Literature Peter Schwenger

At the Borders of Sleep is a unique exploration of the connections between literature and the liminal states between waking and sleeping-from falling asleep and waking up, to drowsiness and insomnia, to states in which sleeping and waking mix. Delving into philosophy as well as literature, Peter Schwenger investigates the threshold between waking and sleeping as an important and productive state between the forced march of rational thought and the oblivion of unconsciousness.

While examining literary representations of the various states between waking and sleeping, At the Borders of Sleep also analyzes how writers and readers alike draw on and enter into these states. To do so Schwenger reads a wide range of authors for whom the borders of sleep are crucial, including Marcel Proust, Stephen King, Paul Valery, Fernando Pessoa, Franz Kafka, Giorgio de Chirico, Virginia Woolf, Philippe Sollers, and Robert Irwin. Considering drowsiness, insomnia, and waking up, he looks at such subjects as the hypnagogic state, the experience of reading and why it is different from full consciousness, the relationships between insomnia and writing and why insomnia is often a source of creative insight, and the persistence of liminal elements in waking thought. A final chapter focuses on literature that blurs dream and waking life, giving special attention to experimental writing.

Peter Schwenger is resident fellow at the University of Western Ontario's Centre for the Study of Theory and Criticism. He is the author of several books including The Tears of Things: Melancholy and Physical Objects (Minnesota, 2006).