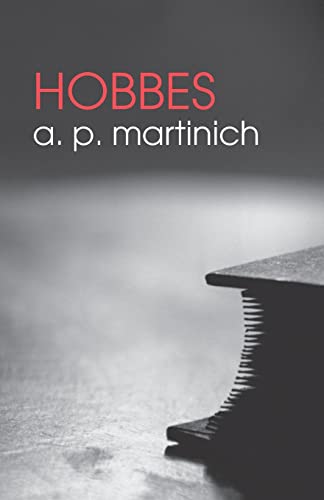 Thomas Hobbes (1588-1679) was the first great English philosopher and one of the most important theorists of human nature and politics in the history of Western thought.

This superlative introduction presents Hobbes' main doctrines and arguments, covering all of Hobbes' philosophy. A.P. Martinich begins with a helpful overview of Hobbes' life and work, setting his ideas against the political and scientific background of seventeenth-century England. He then introduces and assesses, in clear chapters, Hobbes' contributions to fundamental areas of philosophy:

The final chapter considers the legacy of Hobbes' thought and his influence on contemporary philosophy.

'In short, this is a fine and authoritative study by an acknowledged master of his subject. No serious student of Hobbes or early modern philosophy should ignore this book.' - Paul Kelly, London School of Economics

'This is an excellent book, well-suited to the Routledge Philosophers series. It is clearly and accessibly written, comprehensive, up-to-date on current scholarship, well-organised and often humorous. I think undergraduates will find the book both readable and enjoyable. Teachers will find it very helpful.' - S.A. Lloyd, University of Southern California

A.P.Martinich is Professor of philosophy at the University of Texas, Austin. He is the author of A Hobbes Dictionary (Blackwell, 1995), Hobbes: A Biography (CUP, 2000) and the editor of Philosophy of Language (OUP, 2000).

GOR003135417
Hobbes by A.P. Martinich
A.P. Martinich
The Routledge Philosophers
Used - Very Good
Paperback
Taylor & Francis Ltd
2005-04-25
266
0415283280
9780415283281
N/A
Book picture is for illustrative purposes only, actual binding, cover or edition may vary.
This is a used book - there is no escaping the fact it has been read by someone else and it will show signs of wear and previous use. Overall we expect it to be in very good condition, but if you are not entirely satisfied please get in touch with us.