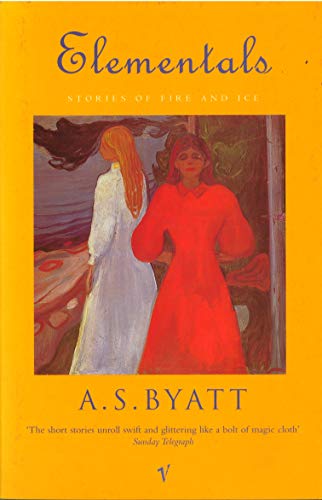 Elementals
by A S Byatt

In Stock
$11.99
inc. GST
In the same delectable format as The Matisse Stories, this collection deals with betrayal and loyalty, quests and longings, loneliness and passion - the mysterious absences at the heart of the fullest lives.
Very Good
Only 4 left

Elementals: Stories of Fire and Ice by A S Byatt

In the same delectable format as The Matisse Stories, this collection deals with betrayal and loyalty, quests and longings, loneliness and passion - the mysterious absences at the heart of the fullest lives. A scholar pursues an elusive biographer, stumbling upon buried fragments of distant lives; a woman walks out of her previous existence and encounters an ice-blond stranger from a secretive world; a schoolgirl draws a blood-filled picture of jael; a swimming pool reveals a beauteous monster in its depths. The settings range from the heart of Provence in summer to the cold forests of Scandinavia, form chalk-strewn classrooms to herbscented hillsides, from suburban streets to rocky wilds.

"Rich physical details, lush sensual descriptions of people and places...Byatt's engaging message is that art, curiosity and stories and save us. Now read on" -- Michele Roberts * Independent on Sunday *
"Byatt weaves myth and art into bewitching fables...an astonishing display of imagination. The whole collection has a kaleidoscopic beauty" -- Mark Sanderson * Time Out *
"Drenched in colour, spangled with optical effects, the yarns and parables in Elementals pay rapt attention to a world of light" -- Boyd Tonkin * Independent *
""Cold", the story at the centre of Elementals is entirely fabulous...Its tenor is voluptuous and melancholy, like that of Oscar Wilde's fairy stories, with some of the erotic edge of Angela Carter's...These stories are full of colour and light" -- Lucy Hughes-Hallett * Sunday Times *
"In a sparkling year for short stories, A.S. Byatt takes all the prizes...A wonderful series of reflections on the harsh realities of life (loneliness, death and betrayal) overlaid with a goassamer-light cloak of passion, mystery and ancient magic" -- Carolyn Hart * Marie Claire *

About A S Byatt

A.S. Byatt is a novelist, short-story writer and critic of international renown. Her novels include Possession (winner of the Booker Prize 1990), the Frederica Quartet and The Children's Book, which was shortlisted for the Booker Prize and won the James Tait Black Memorial Prize for Fiction. She was appointed CBE in 1990 and DBE in 1999, and was awarded the Erasmus Prize 2016 for her `inspiring contribution to life writing' and the Pak Kyongni Prize 2017. In 2018 she received the Hans Christian Andersen Literature Award.

GOR001402580
Elementals: Stories of Fire and Ice by A S Byatt
A S Byatt
Used - Very Good
Paperback
Vintage Publishing
1999-10-28
240
0099273764
9780099273769
N/A
Book picture is for illustrative purposes only, actual binding, cover or edition may vary.
This is a used book - there is no escaping the fact it has been read by someone else and it will show signs of wear and previous use. Overall we expect it to be in very good condition, but if you are not entirely satisfied please get in touch with us.