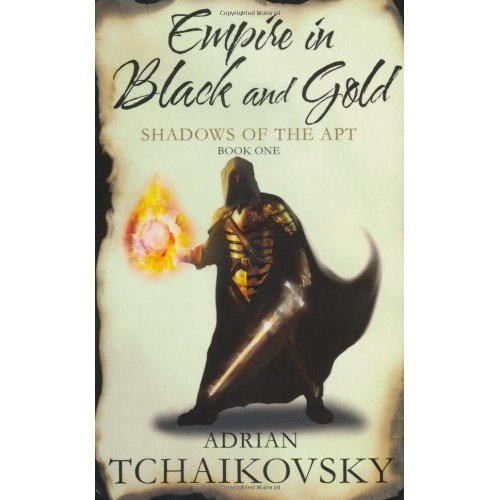 Empire in Black and Gold
by Adrian Tchaikovsky

In Stock
$17.49
inc. GST
First volume in a dramatic and colourful new fantasy series, `Shadows of the Apt', about the fight for survival against a menacingly regimented empire
Very Good Good Well Read
12 in stock

Empire in Black and Gold Summary

Empire in Black and Gold by Adrian Tchaikovsky

Seventeen years ago Stenwold witnessed the Wasp Empire storming the city of Myna in a brutal war of conquest. Since then he has preached vainly against this threat in his home city of Collegium, but now the Empire is on the march, with its spies and its armies everywhere, and the Lowlands lie directly in its path. All the while, Stenwold has been training youthful agents to fight the Wasp advance, and the latest recruits include his niece, Che, and his mysterious ward, Tynisa. When his home is violently attacked, he is forced to send them ahead of him and, hotly pursued, they fly by airship to Helleron, the first city in line for the latest Wasp invasion.

Stenwold and Che are Beetle-kinden, one of many human races that take their powers and inspiration each from a totem insect, but he also has allies of many breeds: Mantis, Spider, Ant, with their own particular skills. Foremost is the deadly Mantis-kinden warrior, Tisamon, but other very unlikely allies also join the cause. As things go from bad to worse amid escalating dangers, Stenwold learns that the Wasps intend to use the newly completed railroad between Helleron and Collegium to launch a lightning strike into the heart of the Lowlands. Then he gathers all of his agents to force a final showdown in the engine yard . . .

Adrian Tchaikovsky was born in Woodhall Spa, Lincolnshire before heading off to Reading to study psychology and zoology. For reasons unclear even to himself he subsequently ended up in law and has worked as a legal executive in both Reading and Leeds, where he now lives. Married, he is a keen live role-player and occasional amateur actor, has trained in stage-fighting, and keeps no exotic or dangerous pets of any kind, possibly excepting his son. He's the author of the critically acclaimed Shadows of the Apt series, and his standalone novel Children of Time is the winner of the 30th Anniversary Arthur C Clarke Award for Best Science Fiction Novel.

GOR009963249
Empire in Black and Gold by Adrian Tchaikovsky
Adrian Tchaikovsky
Shadows of the Apt
Used - Very Good
Paperback
Pan Macmillan
2008-07-04
624
B00BG7FGFK
9780230704138
N/A
Book picture is for illustrative purposes only, actual binding, cover or edition may vary.
This is a used book - there is no escaping the fact it has been read by someone else and it will show signs of wear and previous use. Overall we expect it to be in very good condition, but if you are not entirely satisfied please get in touch with us.