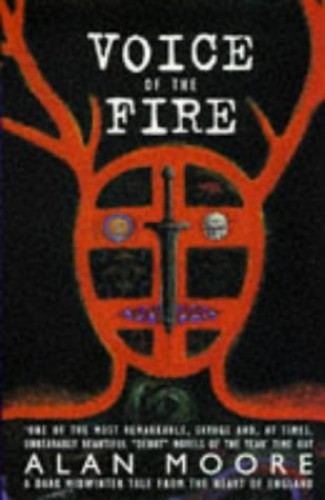 Voice of the Fire
by Alan Moore

In Stock
$34.99
+10% GST
The dark aspect of human history is seen from the vantage point of a single place. Linked geographically within a radius of only ten miles, yet separated in time by a span of some 5000 years, each chapter in this novel brings a different voice from the ashes of the past.
Very Good
Only 2 left

Voice of the Fire Summary

Voice of the Fire by Alan Moore

Master storyteller Alan Moore (Watchmen) delivers twelve interconnected stories of lust, madness, and ectasy, all set in central England and spanning over six thousand years, the narratives woven together in patterns of recurring events, strange traditions, and uncanny visions. First, a cave-boy loses his mother, falls in love, and learns a deadly lesson. He is followed by an extraordinary cast of characters: a murderess who impersonates her victim; a fisherman who believes he has become a different species; a Roman emissary who realizes the bitter truth about the Empire; a crippled nun who is healed miraculously by a disturbing apparition; an old crusader whose faith is destroyed by witnessing the ultimate relic; two witches, lovers, who burn at the stake. Each related tale traces a path in a journey of discovery of the secrets of the land.

In the tradition of Kipling's Puck of Pook's Hill, Schwob's Imaginary Lives, and Borges' A Universal History of Infamy, Moore travels through history, blending truth and conjecture, in a novel that is dazzling, moving, sometimes tragic, but always mesmerizing.

With an introduction by Neil Gaiman, a suite of full-color plates by Jos Villarrubia, and a cover design by Chip Kidd.

Alan Moore is widely regarded as the best and most influential writer in the history of comics. His seminal works include Miracleman and Watchmen, for which he won the coveted Hugo Award. Never one to limit himself in form or content, Moore has also published novels, Voice of the Fire and Jerusalem, and an epic poem, The Mirror of Love. Four of his ground-breaking graphic novels--From Hell, Watchmen, V for Vendetta, and The League of Extraordinary Gentlemen--have been adapted to the silver screen. Moore currently resides in Northampton, England.

GOR003232683
Voice of the Fire by Alan Moore
Alan Moore
Used - Very Good
Paperback
Orion Publishing Co
1997-10-23
320
0575400552
9780575400559
N/A
Book picture is for illustrative purposes only, actual binding, cover or edition may vary.
This is a used book - there is no escaping the fact it has been read by someone else and it will show signs of wear and previous use. Overall we expect it to be in very good condition, but if you are not entirely satisfied please get in touch with us.