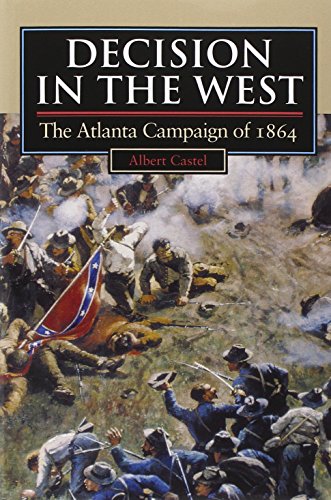 Decision in the West
by Albert Castel

In Stock
$64.99
inc. GST
This recollection of the Civil War documents the armies on the move and incorporates biographical sketches and stories of bravery.
Good
Only 1 left

Decision in the West Summary

Decision in the West: Atlanta Campaign of 1864 by Albert Castel

Following a skirmish on June 28, 1864, a truce is called so the North can remove their dead and wounded. For two hours, Yankees and Rebels mingle, with some of the latter even assisting the former in their grisly work. Newspapers are exchanged. Northern coffee is swapped for Southern tobacco. Yanks crowd around two Rebel generals, soliciting and obtaining autographs.
As they part, a Confederate calls to a Yankee, "I hope to miss you, Yank, if I happen to shoot in your direction." "May I, never hit you Johnny if we fight again," comes the reply.

The reprieve is short. A couple of months, dozens of battles, and more than 30,000 casualties later, the North takes Atlanta.

One of the most dramatic and decisive episodes of the Civil War, the Atlanta Campaign was a military operation carried out on a grand scale across a spectacular landscape that pitted some of the war's best (and worst) general against each other.

In Decision in the West, Albert Castel provides the first detailed history of the Campaign published since Jacob D. Cox's version appeared in 1882. Unlike Cox, who was a general in Sherman's army, Castel provides an objective perspective and a comprehensive account based on primary and secondary sources that have become available in the past 110 years.

Castel gives a full and balanced treatment to the operations of both the Union and Confederate armies from the perspective of the common soldiers as well as the top generals. He offers new accounts and analyses of many of the major events of the campaign, and, in the process, corrects many long-standing myths, misconceptions, and mistakes. In particular, he challenges the standard view of Sherman's performance.

Written in present tense to give a sense of immediacy and greater realism, Decision in the West demonstrates more definitively than any previous book how the capture of Atlanta by Sherman's army occurred and why it assured Northern victory in the Civil War.

Decision in the West Reviews

Albert Castel is a Civil War historian living and writing in Hillsdale, Michigan. He is the author of General Sterling Price and the Civil War in the West, A Frontier State at War: Kansas, 1861-1865, and The Presidency of Andrew Johnson.

GOR010312790
Decision in the West: Atlanta Campaign of 1864 by Albert Castel
Albert Castel
Modern War Studies
Used - Good
Paperback
University Press of Kansas
1992-11-30
670
070060748X
9780700607488
N/A
Book picture is for illustrative purposes only, actual binding, cover or edition may vary.
The book has been read but remains in clean condition. All pages are intact and the cover is intact. Some minor wear to the spine.