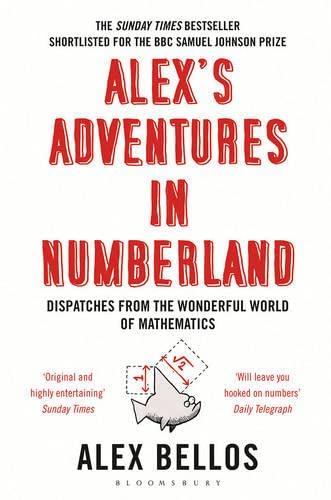 The world of maths can seem mind-boggling, irrelevant and, let's face it, boring. This groundbreaking book reclaims maths from the geeks. Mathematical ideas underpin just about everything in our lives: from the surprising geometry of the 50p piece to how probability can help you win in any casino. In search of weird and wonderful mathematical phenomena, Alex Bellos travels across the globe and meets the world's fastest mental calculators in Germany and a startlingly numerate chimpanzee in Japan. Packed with fascinating, eye-opening anecdotes, Alex's Adventures in Numberland is an exhilarating cocktail of history, reportage and mathematical proofs that will leave you awestruck.

`Original and highly entertaining' * Sunday Times *
`Will leave you hooked on numbers' * Daily Telegraph *
`A page turner about humanity's strange, never easy and, above all, never dull relationship with numbers' * New Scientist *
'Outstanding ... The style is laced with humour, but at all times, the star of the show is mathematics' * Ian Stewart, Prospect *

Alex Bellos has a degree in Mathematics and Philosophy from Oxford University. He has worked for the Guardian in London and Rio de Janeiro, where he was the paper's unusually numerate foreign correspondent. In 2002 he wrote a critically acclaimed book about Brazilian football and in 2006 ghostwrote Pele's autobiography, which was a number one bestseller.

GOR002652677
Alex's Adventures in Numberland by Alex Bellos
Alex Bellos
Used - Very Good
Paperback
Bloomsbury Publishing PLC
2011-04-04
448
1408809591
9781408809594
Short-listed for BBC Samuel Johnson Prize for Non-Fiction 2010 Short-listed for Galaxy National Book Awards: Non-Fiction Book of the Year 2010
Book picture is for illustrative purposes only, actual binding, cover or edition may vary.
This is a used book - there is no escaping the fact it has been read by someone else and it will show signs of wear and previous use. Overall we expect it to be in very good condition, but if you are not entirely satisfied please get in touch with us.