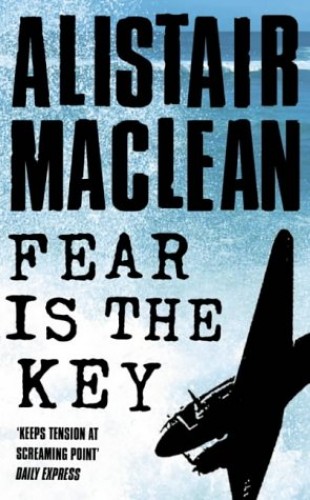 Fear is the Key
by Alistair MacLean

A classic novel of ruthless revenge set in the steel jungle of an oil rig in the Gulf of Mexico - and on the sea bed below it. Now reissued in a new cover style.

Fear is the Key Summary

Fear is the Key by Alistair MacLean

A classic novel of ruthless revenge set in the steel jungle of an oil rig in the Gulf of Mexico - and on the sea bed below it. Now reissued in a new cover style.

A sunken DC-3 lying on the Caribbean floor. Its cargo: ten million, two hundred and fifty thousand dollars in gold ingots, emeralds and uncut diamonds guarded by the remains of two men, one woman and a very small boy.

The fortune was there for the taking, and ready to grab it were a blue-blooded oilman with his own offshore rig, a gangster so cold and independent that even the Mafia couldn't do business with him and a psychopathic hired assassin.

Against them stood one man, and those were his people, those skeletons in their watery coffin. His name was Talbot, and he would bury his dead - but only after he had avenged their murders.

Fear is the Key Reviews

'Guns, gangsters, sudden death, terrific action on land and under the sea ... Fear is the Key has a plot that will require a lot of willpower to stop you looking at the last page.'
Sunday Mirror

Alistair MacLean, the son of a Scots minister, was brought up in the Scottish Highlands. In 1941 he joined the Royal Navy. After the war he read English at Glasgow University and became a schoolmaster. The two and a half years he spent aboard a wartime cruiser were to give him the background for HMS Ulysses, his remarkably successful first novel, published in 1955. He is now recognized as one of the outstanding popular writers of the 20th century, the author of 29 worldwide bestsellers, many of which have been filmed. He died in 1987.

GOR000282721
Fear is the Key by Alistair MacLean
Alistair MacLean
Used - Very Good
Paperback
HarperCollins Publishers
1995-11-01
384
0006159915
9780006159919
N/A
Book picture is for illustrative purposes only, actual binding, cover or edition may vary.
This is a used book - there is no escaping the fact it has been read by someone else and it will show signs of wear and previous use. Overall we expect it to be in very good condition, but if you are not entirely satisfied please get in touch with us.