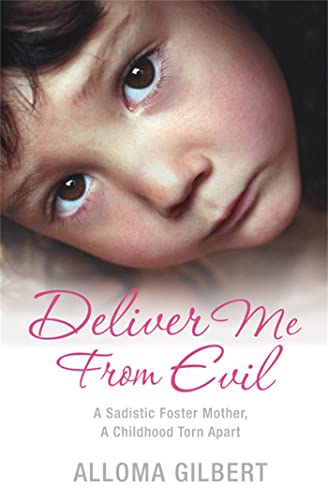 Deliver Me From Evil
by Alloma Gilbert

Out of Stock
$13.49
inc. GST
An utterly compelling story of brave a young woman who survived a childhood in hell.
Very Good
Only 0 left

Deliver Me From Evil Summary

Deliver Me From Evil: A Sadistic Foster Mother, A Childhood Torn Apart by Alloma Gilbert

'When I was a little girl I believed what I was told over and over again: that I was evil, that I deserved to be tortured because I was the Devil's child . . .'

In April 2007 foster-mother Eunice Spry was sentenced to fourteen years in prison for her sadistic abuse of the children in her care. The details of her cruelty were so sickening they shocked the country. Alloma Gilbert was one of Spry's young victims, sent to live with her at the age of six and left at her mercy for eleven brutal years.

Eunice used her own twisted religious beliefs as an excuse for punishing her foster children. When she took them to live on an isolated farmhouse, the abuse escalated to terrifying levels - a stick was thrust down Alloma's throat so often it was stained red with blood, she was starved for over a year and survived only by secretly eating pigswill, and the vicious beatings were relentless. At the age of seventeen she finally escaped but, alone in the outside world, she fell prey to abusive men. It was the birth of her baby daughter that saved her, that finally taught her what love really is. Written with powerful honesty, Deliver Me From Evil is a moving and inspiring story of survival.

Alloma Gilbert is twenty-two years old and is studying to be a veterinary nurse.

GOR001112947
Deliver Me From Evil: A Sadistic Foster Mother, A Childhood Torn Apart by Alloma Gilbert
Alloma Gilbert
Used - Very Good
Paperback
Pan Macmillan
2008-03-07
288
0330457314
9780330457316
N/A
Book picture is for illustrative purposes only, actual binding, cover or edition may vary.
This is a used book - there is no escaping the fact it has been read by someone else and it will show signs of wear and previous use. Overall we expect it to be in very good condition, but if you are not entirely satisfied please get in touch with us.