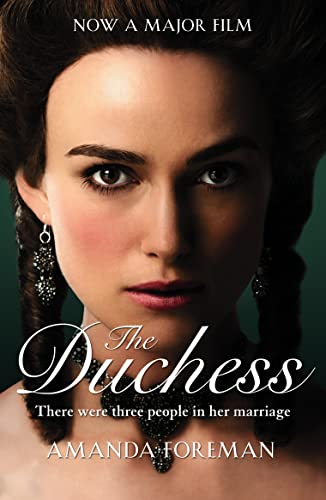 The Duchess
by Amanda Foreman

A tale of decadence and excess, great houses and wild parties, love and sexual intrigue, this biography of Georgiana, Duchess of Devonshire, casts an astonishing new light on the nobility of eighteenth-century England.

The Duchess by Amanda Foreman

A tale of decadence and excess, great houses and wild parties, love and sexual intrigue, this biography of Georgiana, Duchess of Devonshire, casts an astonishing new light on the nobility of eighteenth-century England.

Fashionable, extravagant and universally adored, Georgiana Cavendish, Duchess of Devonshire, was one of the most influential women of her day. But her flamboyant public persona hid a multitude of personal troubles: drug addiction, vast gambling debts, an unhappy menage a trois with her husband and best friend, and a doomed affair with the future prime minister. Like her descendant, Diana, Princess of Wales, Georgiana was a vulnerable woman living the life of an icon.

This utterly absorbing biography, recently made into a major film starring Keira Knightley as the Duchess of Devonshire, paints a touching portrait of a misunderstood woman.

`An outstanding debut by a young biographer fully in control of her sources, and with an easy and elegant writing style.' Roy Strong, Sunday Times

`A pungent, intimate blend of biography and history...a provocative contribution to our understanding of women of the past.' Jenny Uglow, Independent

`Real-life glamour, peppered with a menage a trois and a dose of depression...Curl up and devour it.' Elle

`From this very entertaining account emerges a vibrant picture of late-eighteenth-century life and politics, and the portrait of a rare and highly talented woman.' Observer

`Brilliantly researched, compellingly told, this is biography of the first order.' Daily Telegraph

Amanda Foreman was born in London in 1968. She was educated at Sarah Lawrence College and Columbia University in New York, before receiving her doctorate in Eighteenth-Century British History from Oxford University. Since 2005 she has a been a Visiting Fellow at Queen Mary College, London. She is married with five children.

GOR000713402
The Duchess by Amanda Foreman
Amanda Foreman
Used - Very Good
Paperback
HarperCollins Publishers
2008-08-04
496
0007285752
9780007285754
N/A
Book picture is for illustrative purposes only, actual binding, cover or edition may vary.
This is a used book - there is no escaping the fact it has been read by someone else and it will show signs of wear and previous use. Overall we expect it to be in very good condition, but if you are not entirely satisfied please get in touch with us.