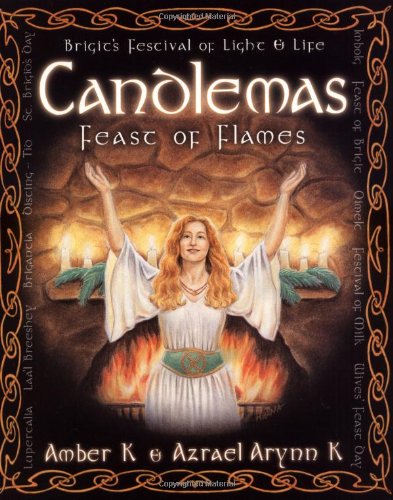 In Stock
$33.99
inc. GST
Beyond the darkness of winter, there is an oasis of light and warmth on the journey from solstice to spring known as Candlemas, Imbolc, Brigantia, or Lupercus. It is a celebration held in early February to welcome the returning light. This book details the celebration of the sun's rebirth,
Very Good
Only 2 left

Beyond the darkness of winter, there is an oasis of light and warmth on the journey from solstice to spring. Known as Candlemas, Imbolg, Brigantia, or Lupercus, it is a hope-filled celebration held in early February to welcome the returning light and the promise of spring. Candlemas sheds light on the origins, lore, and customs of this ancient holy day with: Myths and stories: Brigit the Goddess, Brigid the Saint, and her meaning today Candlemas magick and divination: flame scrying, hearthside divination, candle magick, and protection magick Late winter goodies and feasts: Brede's Braid Bread, Guiness Stew, Bubble and Squeak, Mulled Cider or Wine February festivals and traditions: rituals for purification, blessings, and renewal, from the Irish, British, Scots, Welsh, Norwegian, Greek, Roman, and Chinese cultures Seasonal crafts and games: Brigid's crosses or sun wheels, "Begging for Biddy," and a Brigit corn dolly

Amber K is a third degree priestess of the Wiccan faith. She was initiated at the Temple of the Pagan Way in Chicago and served on the Council of Elders there. Her books on magick and the Craft have been widely circulated in the United States and Europe, and for nearly 25 years she has traveled across the U.S. teaching the Craft. She has worked with Circle and the Re-Formed Congregation of the Goddess, and served as National First Officer of the Covenant of the Goddess for three terms. She is a founder of Our Lady of the Woods and the Ladywood Tradition of Wicca, and currently is Executive Director of Ardantane, a Wiccan/Pagan seminary is northern New Mexico.
Azrael Arynn K is a third-degree Wiccan Priestess and High Priest of the Coven of Our Lady of the Woods, and has also held offices in the Covenant of the Goddess. She resides in New Mexico, where she is both Facilities Director and Dean of the School of Sacred Living at Ardantane Pagan Learning Center. She co-authors books on the Craft with Amber K, and travels and teaches widely throughout the United States.

GOR002579173
Candlemas: Feast of Flames by Amber K
Amber K
Used - Very Good
Paperback
Llewellyn Publications,U.S.
2001-09-18
360
0738700797
9780738700793
N/A
Book picture is for illustrative purposes only, actual binding, cover or edition may vary.
This is a used book - there is no escaping the fact it has been read by someone else and it will show signs of wear and previous use. Overall we expect it to be in very good condition, but if you are not entirely satisfied please get in touch with us.