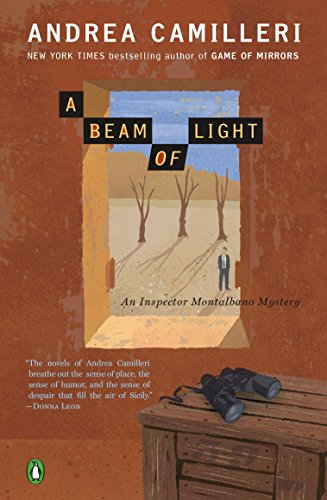 A Beam of Light
by Andrea Camilleri

A Beam of Light Summary

A Beam of Light by Andrea Camilleri

"You either love Andrea Camilleri or you haven't read him yet. Each novel in this wholly addictive, entirely magical series, set in Sicily and starring a detective unlike any other in crime fiction, blasts the brain like a shot of pure oxygen -- altogether transporting. Long live Camilleri, and long live Montalbano." A.J. Finn, #1 New York Times bestselling author of The Woman in the Window

"In Sicily, where people do things as they please, Inspector Salvo Montalbano is a bona fide folk hero."--The New York Times Book Review

When Inspector Montalbano falls under the charms of beautiful gallery owner Marian, his longtime relationship with Livia comes under threat. Meanwhile, he is also troubled by a strange dream as three crimes demand his attention: the assault and robbery of a wealthy merchant's young wife, shady art deals, and a search for arms traffickers that leads him deep into the countryside, where the investigation takes a tragic turn.

A Beam of Light Reviews

Praise for Andrea Camilleri and the Montalbano Series

"Camilleri's Inspector Montalbano mysteries might sell like hotcakes in Europe, but these world-weary crime stories were unknown here until the oversight was corrected (in Stephen Sartarelli's salty translation) by the welcome publication of The Shape of Water...This savagely funny police procedural...prove[s] that sardonic laughter is a sound that translates ever so smoothly into English."--The New York Times Book Review

"Hailing from the land of Umberto Eco and La Cosa Nostra, Montalbano can discuss a pointy-headed book like Western Attitudes Toward Death as unflinchingly as he can pore over crime-scene snuff photos. He throws together an extemporaneous lunch of shrimp with lemon and oil as gracefully as he dodges advances from attractive women."--Los Angeles Times

"Camilleri is as crafty and charming a writer as his protagonist is an investigator."--The Washington Post Book World

"Like Mike Hammer or Sam Spade, Montalbano is the kind of guy who can't stay out of trouble...Still, deftly and lovingly translated by Stephen Sartarelli, Camilleri makes it abundantly clear that under the gruff, sardonic exterior our inspector has a heart of gold, and that any outburst, fumbles, or threats are made only in the name of pursuing truth."--The Nation

"Camilleri can do a character's whole backstory in half a paragraph."--The New Yorker

"Subtle, sardonic, and molto simpatico: Montalbano is the Latin re-creation of Philip Marlowe, working in a place that manages to be both more and less civilized than chandler' Los Angeles."--Kirkus Reviews (starred)

Andrea Camilleri is the bestselling author of the popular Inspector Montalbano Mystery series, as well as a number of historical novels that take place in Sicily. He lives in Italy.

Stephen Sartarelli is an award-winning translator and poet who lives in France.

GOR007124482
A Beam of Light by Andrea Camilleri
Andrea Camilleri
Inspector Montalbano Mystery
Used - Very Good
Paperback
Penguin Books Ltd
2015-09-01
288
0143126431
9780143126430
N/A
Book picture is for illustrative purposes only, actual binding, cover or edition may vary.
This is a used book - there is no escaping the fact it has been read by someone else and it will show signs of wear and previous use. Overall we expect it to be in very good condition, but if you are not entirely satisfied please get in touch with us.