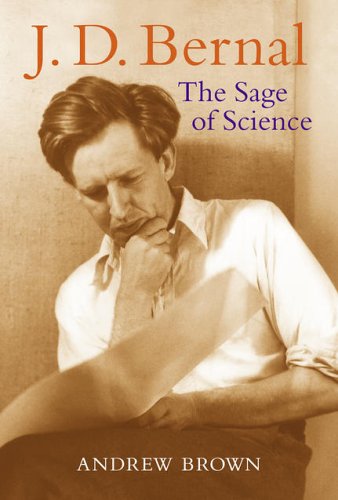 In Stock
$60.99
inc. GST
Describes Desmond Bernal - or 'Sage', as he was known. An extraordinary man by any account - a brilliant scientist, a fervent Marxist, and a colourful, bohemian figure. This biography includes material from his diaries, and sheds light on his international influence during both WWII and the ensuing peace movement.
Like New Very Good
Only 1 left

J. D. Bernal, known as 'Sage', was an extraordinary man and multifaceted character. A scientist of dazzling intellectual ability and a leading figure in the development of X-ray crystallography, he was a polymath, a fervent Marxist, and much admired worldwide. Although he himself never won a Nobel Prize, several of his distinguished students went on to do so, including Dorothy Hodgkin, Max Perutz, and Aaron Klug. Andrew Brown has had unprecedented access to Bernal's papers and diaries, and this biography includes previously unpublished material on Bernal's role during the Second World War. Bernal not only changed the course of science, but was witness to (and often a participant in) historical events (the Easter Rebellion, the Great Strike, the anti-fascist movement and pacifist causes, civil defence, RAF bombing strategy, the planning for D-Day, post-war rebuilding, and nuclear weapons). One of the few men familiar with Downing Street, the White House and the Kremlin, he left fascinating accounts of Churchill, Stalin, Mao Zedong, Louis Mountbatten and Picasso, as well as the century's greatest scientists. Brown's compelling account covers all aspects of Bernal's brilliant, colourful, and Bohemian life, and introduces this towering figure of early 20th century science to a wide audience.

Apart from taking its place as the best existing account of Bernal's life and work, Brown's book provides an inspiring introduction to the academic culture of the 1920s and 1930s, a period which to those living through it seemed to overflow with hope, challenge, and passion. Richard Barnett, Lancet Bernal was himself a Colossus, and Andrew Brown has written a biography to match. It should stand as a classic. Walter Gratzer, Current Biology Andrew Brown does an outstanding job of weaving together the many strands of Bernal's complicated life to create a hugely entertaining and enjoyable biography. Robert Matthews, BBC Focus This complex and fascinating life is related with clarity and admirable organisation by Andrew Brown. Brown succeeds in not being overwhelmed by his subject. His book is strong on the science, but strikes a good balance between the scientific work and the many other strands of Bernal's career. He gives a real sense of the astonishing range of his subject's achievements. Jon Turney, THES Marvellous book. Brian Cathcart, New Statesman In this distinguished and definitive biography, Andrew Brown lays open the mystery of Sage. Brown writes with a historical flair rare in science writers. Brenda Maddox, Sunday Times To read this book is almost to relive the European intellectual life of the last century. Andrew Brown's account of Bernal's scientific work is written with extraordinary clarity... he takes us on a thrilling voyage. Sebastian Faulkes, The Spectator ...admirable book... Graham Farmelo, Sunday Telegraph This is a very fine (and large) book. Much more than a biography, because of Bernal's involvement in so many sociological issues of his day, it takes the form of a social history of the first half of the twentieth century. Kenneth C. Holmes, Nature

Andrew Brown is a medical doctor and radiologist turned scientific biographer. His biography of Sir James Chadwick, discoverer of the neutron, 'The Neutron and the Bomb', was published by Oxford University Press in 1997. He has also published a number of scientific papers and articles.

GOR010613683
J. D. Bernal by Andrew Brown
Andrew Brown
Used - Like New
Hardback
Oxford University Press
2005-11-24
592
0198515448
9780198515449
N/A
Book picture is for illustrative purposes only, actual binding, cover or edition may vary.
The book has been read, but looks new. The book cover has no visible wear, and the dust jacket is included if applicable. No missing or damaged pages, no tears, possible very minimal creasing, no underlining or highlighting of text, and no writing in the margins.