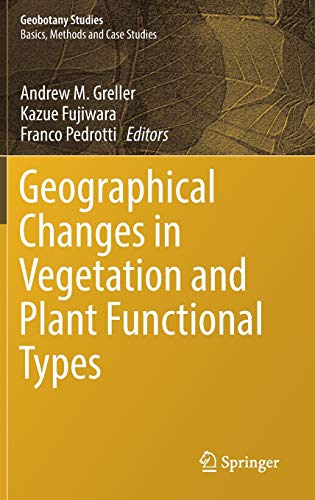 This book presents studies on current vegetation topics, from polar to tropical regions. Section 3 has nine chapters focusing on vegetation history, regional vegetation, and how these have influenced current species organizations and distributions.

This book presents studies on current vegetation topics, from polar to tropical regions. It is a festschrift to mark the 70th birthday of Prof. Elgene O. Box, who has studied vegetation all over the world, both through fieldwork and modeling. It reflects a number of his interests, including basic ecological plant forms (cf 'plant functional types'), temperate-zone forests, and evergreen versus seasonal patterns. Section 1 discusses the concept of vegetation series, while Section 2 has two global-scale chapters on plant functional traits and whether they are related more to climate or phylogeny. Section 3 has nine chapters focusing on vegetation history, regional vegetation, and how these have influenced current species organizations and distributions. Regions treated include Russia, China, the USA, Mexico and Mediterranean areas. Lastly, Section 4 addresses aspects of vegetation change and plant ecology. Every chapter in this unique book offers original ideas on the topic of vegetation, as the authors are assembled from a world-wide population of leading vegetational ecologists, whose interests range from local communities to global theoretical questions.
Andrew Greller received the Ph.D. in Botany from Columbia University, in 1967. He is Professor Emeritus of Biology at the City University of New York (CUNY). Greller publishes in a wide variety of scientific journals, on subjects that include conservation ecology, floristics, vegetation geography, bioclimatology, tropical ecology, alpine ecology, eastern North American forest classification, as well as plant morphology and paleobotany. Throughout his 30-year career at Queens College, he taught numerous college and university-level courses on botany, ecology and bioclimatology. He is a Research Associate at the Institute for Systematic Botany of the New York Botanical Garden. Greller was twice past-President of the Torrey Botanical Society, the oldest botanical society in the Americas. He has been honored with citations and certificates from national and local political entities and non-governmental groups. Greller travels widely, leads field trips, and presents lectures on a wide range of botanical and ecological topics. He has served as a consultant and reviewer for many textbook companies.

Kazue Fujiwara is Professor Emerita of Yokohama National University and Research Professor in the Graduate School of Nanobioscience of Yokohama City University since 2010. She received her Doctor of Science from Tohoku University in 1972. Prof. Fujiwara is a vegetation scientist, adhering closely to classical standards and procedures but also able to apply vegetation science to field study and vegetation rehabilitation efforts in Asia, Europe, Africa and the USA. Her specialties are deciduous and evergreen broad-leaved forests, tropical and subtropical forests, the vegetation of mangroves, mires and coastlines in Asia through the world, as well as detailed vegetation monographs in Japan. In particular, she identifies relationship between potential natural vegetation and actual vegetation, and represents these on vegetation maps. She is also known for her interest in and extensive knowledge of the vegetation of the whole world, having studied vegetation in the field in about 60 countries or comparable regions, on all continents except Antarctica. She publishes specialized studies on Japan, mainland Asia, Southeast Asia, Kenya, eastern North America and Amazon forests often in comparison with other parts of the world. Prof. Fujiwara served as an INTECOL board member (2001-2008) and as a Vice-President of the International Association for Vegetation Science (2000-2007), remaining still in the Advisory Committee of the latter.

Franco Pedrotti is a botanist specialized in the study and cartography of vegetation, environmental cartography and ecological planning. He has also worked in conservation of nature and its resources on the technical and scientific level, as well as in its promotion. He served as President of the Italian Botanical Society from 1982 to 1990, and as President of the Association Internationale Francophone de Phytosociologie from 1982 to 2002, and was awarded honorary degrees in Biology from the "Babes-Bolyai" University of Cluj-Napoca and the "A.I. Cuza" University of Iasi (Romania), in Ecology and Biogeography from the University of Palermo (Italy) and in Gearchitecture from University of Brest (France). He taught Botany, Geobotanical Cartography and Conservation of Nature and its Resources at the Universities of Padova, Milan, Catania, Ferrara and Camerino; currently he is Professor Emeritus at the University of Camerino. He published several textbooks for university students of Biology and Natural Sciences on conservation of flora, vegetation, the environment and protected areas.
GOR010934436
9783319687377
3319687379
Geographical Changes in Vegetation and Plant Functional Types by Andrew M. Greller
Andrew M. Greller
Geobotany Studies
Used - Like New
Hardback
Springer International Publishing AG
2018-04-27
359
N/A
Book picture is for illustrative purposes only, actual binding, cover or edition may vary.
The book has been read, but looks new. The book cover has no visible wear, and the dust jacket is included if applicable. No missing or damaged pages, no tears, possible very minimal creasing, no underlining or highlighting of text, and no writing in the margins
Trustpilot