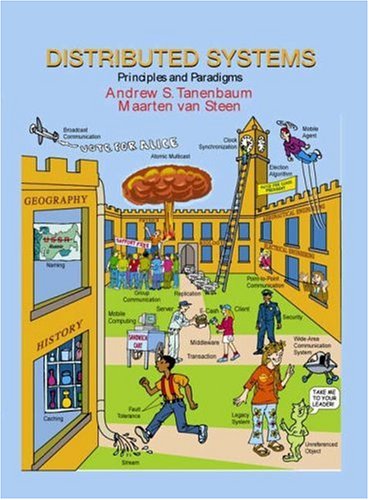 In Stock
$20.99
+10% GST
Covers the principles, advanced concepts, and technologies of distributed systems, including: communication, replication, fault tolerance, and security. Intended for use in a senior/graduate level distributed systems course or by professionals, this text shows you how distributed systems are designed and implemented in real systems.
Very Good
Only 1 left

Andrew S. Tanenbaum has an S.B. degree from M.LT. and a Ph.D. from the University of California at Berkeley. He is currently a Professor of Computer Science at the Vrije Universiteit in Amsterdam, The Netherlands, where he is head of the Computer Systems Department. He is also the Dean of the Advanced School for Computing and Imaging, an interuniversity graduate school doing research on advanced parallel, distributed, and imaging systems. Nevertheless, he is trying very hard to avoid turning into a bureaucrat.

In the past, he has done research on compilers, operating systems, networking, and local-area distributed systems. His current research focuses primarily on the design of wide-area distributed systems that scale to a billion users. This research is being done together with Dr. Maarten van Steen. Together, all his research projects have led to over 90 refereed papers in journals and conference proceedings and five books.

Prof. Tanenbaum has also produced a considerable volume of software. He was the principal architect of the Amsterdam Compiler Kit, a widely-used toolkit for writing portable compilers, as well as of MINIX, a small UNIX clone intended for use in student programming labs. Together with his Ph.D. students and programmers, he helped design the Amoeba distributed operating system, a high-performance microkernel-based distributed operating system. The MINIX and Amoeba systems are now available for free via the Internet.

His Ph.D. students have gone on to greater glory after getting their degrees. He is very proud of them. In this respect he resembles a mother hen.

Prof. Tanenbaum is a Fellow of the ACM, a Fellow of the IEEE, a member of the Royal Netherlands Academy of Arts and Sciences, winner of the 1994 ACM Karl V Karlstrom Outstanding Educator Award, and winner of the 1997 ACM/SIGCSE Award for Outstanding Contributions to Computer Science Education. He is also listed in Who's Who in the World. His home page on the World Wide Web can be found at URL http://www.cs.vu.nl/~ast/.

Maarten van Steen is currently an associate professor at the Vrije Universiteit, Amsterdam where he teaches operating systems, computer networks, and distributed systems. He has also given various highly successful courses on computer systems related subjects to ICT professionals from industry and governmental organizations.

Dr. van Steen studied Applied Mathematics at Twente University and received a Ph.D. from Leiden University in the field of software design techniques for concurrent systems. After his graduate studies he went to work for an industrial research laboratory where he eventually became head of the Computer Systems Group, concentrating on programming support for parallel applications.

After five years of struggling to simultaneously do research and management, he decided to return to academia, first as an assistant professor in Computer Science at the Erasmus University Rotterdam, and later as an assistant professor in Andrew Tanenbaum's group at the Vrije Universiteit in Amsterdam. Going back to university was the right decision; his wife thinks so too.

His current research concentrates on large-scale wide-area distributed systems, with an emphasis on locating mobile objects, system architecture, and adaptive distribution and replication. Together with prof. Tanenbaum he leads the Globe project in which a group of approximately a dozen researchers collaborate to develop a wide-area distributed system by the same name. The Globe system is described at http://www.cs.vu.nl/globe.

(NOTE: Each chapter concludes with a Summary section.)

GOR002830969
Distributed Systems: Principles and Paradigms: International Edition by Andrew S. Tanenbaum
Andrew S. Tanenbaum
Used - Very Good
Paperback
Pearson Education (US)
2001-09-01
803
0131217860
9780131217867
N/A
Book picture is for illustrative purposes only, actual binding, cover or edition may vary.
This is a used book - there is no escaping the fact it has been read by someone else and it will show signs of wear and previous use. Overall we expect it to be in very good condition, but if you are not entirely satisfied please get in touch with us.