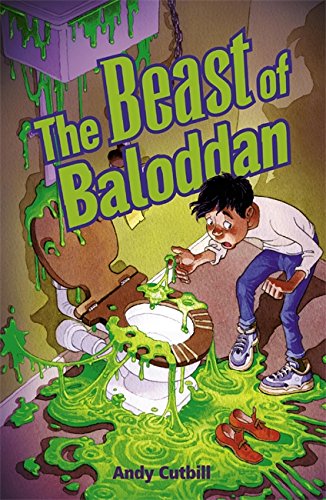 A fast, funny and hair-raising adventure from an exciting new author. Bert's grandmother has just been sucked down the loo - and he needs to work out what's going on, before everyone gets EATEN ... !

Robert Twistleton, Bert to his friends, is an eleven-year-old boy whose family has run the Baloddan Hotel, a bleak Victorian edifice incongruously built on a windswept Cornish headland, for over a hundred years.

Bert is a quiet, unassuming boy who is all set to enjoy the uneventful summer holidays, until the day he discovers his grandmother has been sucked down the toilet and replaced with a slick of slime across the bathroom floor. SOMETHING has taken her.

Bert decides to investigate. With his friend Ruby he explores deep beneath the hotel, through underground tunnels, secret passages and hidden rooms. He discovers that people have been disappearing for years, and that matters will come to a head in only a few days' time at the total eclipse of the sun. Bert suspects that some of the locals know what's going on, although he isn't sure who. Could it be the shuffling shop keeper? Or the hook-nosed vicar? Or even his own grandfather?

Pieces of the puzzle are falling into place, but time is running out fast ...

Andy Cutbill has worked as an art director and copy writer, and developed the extremely successful Albie character for Granada TV, both drawing the character and writing the scripts. He has recently won the Best Children's Series 2002 at the British Animation Awards, and the Canale Grande prize for Best European Programme at the European Animation Festival. He has also won the Best Young Writer of the Year at the B+ Young Talents Awards for Television and Film 2002. Find out more about Andy and his work at www.rippinggags.co.uk.
GOR005034203
9780340865705
0340865709
The Beast of Baloddan by Andy Cutbill
Andy Cutbill
Used - Very Good
Paperback
Hachette Children's Group
20030313
208
null null null null null null null null null null
Book picture is for illustrative purposes only, actual binding, cover or edition may vary.
This is a used book - there is no escaping the fact it has been read by someone else and it will show signs of wear and previous use. Overall we expect it to be in very good condition, but if you are not entirely satisfied please get in touch with us
Trustpilot