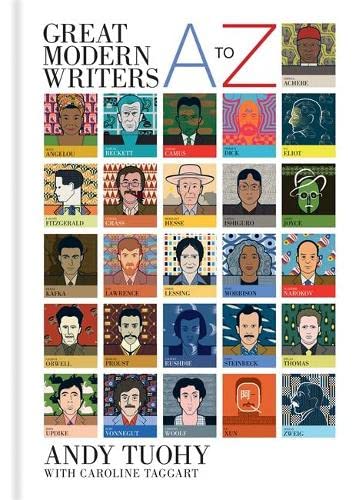 Artist and graphic designer Andy Tuohy turns his hand to the world of modern literature in this new instalment of the A-Z series. Rendered in his distinctive style, this new book features portraits of 52 key modern writers significant for their contribution to literature, with a whole host of names from across the world including:

Best-selling author Caroline Taggart provides a crib sheet of everything you need to know about each author: why they are important in the field of literature, a list of their must-read books, and a surprising fact or two about them. Alongside Andy's portraits, the book features additional imagery, including book covers and author photographs.

A fun, easy guide to some of the best writers of modern times, this is a great gift for anyone who wants to broaden their literary horizons.

Andy Tuohy (Author & Illustrator)
Andy Tuohy is a graphic designer and worked in advertising for many years before becoming a freelance artist and designer. He has had design work commissioned by the Tate Modern and Tate Liverpool, Turner Contemporary and Henley Regatta, and has been featured in Design Week amongst other publications.

Caroline Taggart (Author)
Caroline Taggart was born in London of Scottish parents, spent most of her childhood in New Zealand and went to university in Sheffield. Confused for some time, she now thinks of herself as a Londoner, but continues to change allegiance whenever it suits her, particularly during the rugby season.
Having worked in publishing for 11 years, she gave up a perfectly respectable job to become a freelance editor in 1989. Since then she has worked bizarre hours, gone out to lunch a lot and indulged her lifelong dislike of getting up in the morning.

GOR008609133
A-Z Great Modern Writers by Andy Tuohy
Andy Tuohy
A-Z Great Modern series
Used - Very Good
Hardback
Octopus Publishing Group
2017-03-09
224
1844039137
9781844039135
N/A
Book picture is for illustrative purposes only, actual binding, cover or edition may vary.
This is a used book - there is no escaping the fact it has been read by someone else and it will show signs of wear and previous use. Overall we expect it to be in very good condition, but if you are not entirely satisfied please get in touch with us.