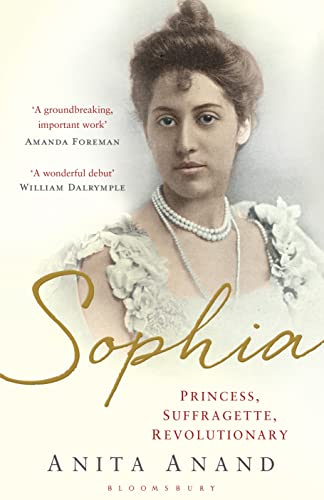 Shortlisted for the Slightly Foxed Best First Biography Prize Winner of the Eastern Eye Alchemy Festival award for Literature In 1876 Sophia Duleep Singh was born into royalty. Her father, Maharajah Duleep Singh, was heir to the Kingdom of the Sikhs, a realm that stretched from the lush Kashmir Valley to the craggy foothills of the Khyber Pass and included the mighty cities of Lahore and Peshawar. It was a territory irresistible to the British, who plundered everything, including the fabled Koh-I-Noor diamond. Exiled to England, the dispossessed Maharajah transformed his estate at Elveden in Suffolk into a Moghul palace, its grounds stocked with leopards, monkeys and exotic birds. Sophia, god-daughter of Queen Victoria, was raised a genteel aristocratic Englishwoman: presented at court, afforded grace-and-favour lodgings at Hampton Court Palace and photographed wearing the latest fashions for the society pages. But when, in secret defiance of the British government, she travelled to India, she returned a revolutionary. Sophia transcended her heritage to devote herself to battling injustice and inequality,a far cry from the life to which she was born. Her causes were the struggle for Indian independence, the fate of the Lascars, the welfare of Indian soldiers in the First World War - and, above all, the fight for female suffrage. She was bold and fearless, attacking politicians, putting herself in the front line and swapping her silks for a nurse's uniform to tend wounded soldiers evacuated from the battlefields. Meticulously researched and passionately written, this enthralling story of the rise of women and the fall of empire introduces an extraordinary individual and her part in the defining moments of recent British and Indian history.

Sophia is the sort of remarkable, almost unbelievable untold true story that every writer dreams of chancing upon. A wonderful debut, written with real spirit and gusto. Anita Anand has produced a winner * William Dalrymple *
A groundbreaking work that at last tells the important story of Sophia Duleep Singh: unflinching princess-in-exile, doughty moderniser and tenacious suffragette. From the streets of India to the corridors of power, Sophia artfully examines the tensions between East and West; and one woman's choice between fighting for freedom and staying silent * Amanda Foreman, author of Georgiana, Duchess of Devonshire *
Anita Anand has definitively restored to history one of the most important and charismatic figures in the suffragette movement. This thoroughly absorbing and deftly informative account instantly pulled me into the irresistible adventure and vitality of Sophia Duleep Singh's defiant and innovative existence. Anand's timely biography is a wonderful testament to Sophia's lifetime of commitment to Indian independence and the advancement of women, and to the range and courage of her achievements * Rachel Holmes, author of Eleanor Marx *
A fascinating and elegantly written life of one of the unknown giants of women's suffrage * Katie Hickman, author of Daughters of Britannia *
Anita Anand's gripping book is a sad story of dispossession and dislocation ... The story is fast-paced and thrilling ... A noble book **** * Daily Telegraph *
Anand is a strong, confident writer ... A rollickingly enjoyable read: a comprehensively researched and zippy account of a profoundly unusual life * Evening Standard *
Vivid and compelling ... Anand writes with the vigour and imaginative reach of a novelist. The many horrors of her enthralling narrative are lightened with judicious flashes of dry wit and a fine eye for detail ... A gripping, emotionally powerful story * New Statesman *
Anand vividly paints the picture of a society girl turned revolutionary ... With deftness and sensibility, Anand tells of the extraordinary contradictions at the heart of the relationship between the Queen and this family ... Anand's skill is to bring to life a character whose name does not figure in the annals of the suffragette movement * Observer *
Sometimes you hear biographers complain that all the great figures have gone ... In this book, her confident and compelling debut, the BBC journalist and presenter Anita Anand leaves that argument in shreds ... Anand has triumphantly rescued Sophia from the pampered oblivion in which a fearful Raj sought to bury her. In doing so, she traces the excruciating double binds, emotional as much as political, that tied imperial Britain to the jewel in its crown * Boyd Tonkin, Independent Book of the Week *
Anand in her latest book uncovers not just an intriguing female life, but also an important perspective on British-Indian colonial history ... Fresh and well written ... What a story, and what a successful telling of it * The Times *
Sophia is so well researched that this is likely to remain a definitive account ... Anand's passion shines **** * Daily Express *
This debut from BBC Radio 4's Any Answers presenter is a terrifically absorbing read * Mslexia *
Fascinating biography-cum-history of a singular life * Independent *
Sophia and her family cannot be understood without understanding the context of developments in the British Empire in this period. Giving details on the development of Sikh traditions, revolutionary ferment in the Indian subcontinent, the British suffrage movement, the First World War, and the partition of India and Pakistan, Anand presents a comprehensive and valuable historical biography. Anand has gone into key archives at Windsor, the Museum of London and elsewhere to uncover the official records and surviving correspondence about Sophia, enriched by photographs and her own interviews. This is a necessary biography, drawing attention to the broader facets of the British suffragette movement and the depth of connections between the Indian subcontinent and Britain in the Victorian and Edwardian eras * The Times *
In Sophia: Princess, Suffragette, Revolutionary, however, Anita Anand shows how she became a firebrand and leading activist in the suffragette movement -- Marcus Field * Independent Books of the Year *
Princess Sophia Duleep Singh's life is one of those stories that begs for a gifted storyteller. Anand, a journalist, is more than up to the task ... The book is an illuminating study of the splashes of color that complicated the often gray Victorian scene' -- Best Biographies of 2015 * Daily Beast *

Anita Anand has been a radio and television journalist for almost twenty years. She is the presenter of Any Answers on BBC Radio 4. During her career, she has also presented Drive, Doubletake and the Anita Anand Show on Radio 5 Live, and Saturday Live, The Westminster Hour, Beyond Westminster, Midweek and Woman's Hour on Radio 4. On BBC television she has presented The Daily Politics, The Sunday Politics and Newsnight. She lives in west London. Sophia is her first book. It is the winner of the Eastern Eye Alchemy Festival Award for Literature and was shortlisted for the Slightly Foxed Best First Biography Prize. @tweeter_anita

GOR007081317
Sophia: Princess, Suffragette, Revolutionary by Anita Anand
Anita Anand
Used - Very Good
Paperback
Bloomsbury Publishing PLC
2015-01-15
432
140886200X
9781408862001
N/A
Book picture is for illustrative purposes only, actual binding, cover or edition may vary.
This is a used book - there is no escaping the fact it has been read by someone else and it will show signs of wear and previous use. Overall we expect it to be in very good condition, but if you are not entirely satisfied please get in touch with us.