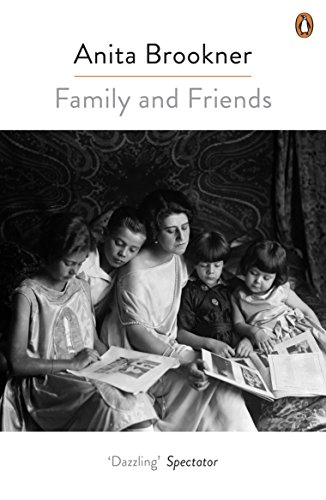 Family And Friends
by Anita Brookner

Family And Friends by Anita Brookner

'Sofka gazes ahead, with her family's future before her . . .'

Sofka Dorn, widowed matriarch of a prosperous German Jewish family living in England, rules her four children with an exacting hand. Frederick, the eldest son, is a disgracefully charming 'ladies' man, and like his flirtatious sister, Betty, is adored and indulged by his mother. Alfred and Mimi, both steady and solitary, are a disappointment to Sofka, who values strength and boldness of spirit. But, as their story unfolds, it becomes clear that the lives each must live and the times each must endure will change them in ways even Sofka could never have imagined.

How can anything be so funny and so sad both at once? Every sentence is an object lesson in compression and wit. -- Tessa Hadley on 'A Start in Life' * Guardian Summer Reads, 2015 *
Dazzling. * Spectator *
Works so brilliantly. * Daily Telegraph *
Brookner has a merciless comic gift. * Sunday Times *

Anita Brookner was born in south London in 1928, the daughter of a Polish immigrant family. She trained as an art historian, and worked at the Courtauld Institute of Art until her retirement in 1988. She published her first novel, A Start in Life, in 1981 and her twenty-fourth, Strangers, in 2009. Hotel du Lac won the 1984 Booker Prize. As well as fiction, Anita Brookner has published a number of volumes of art criticism.

GOR009707933
Family And Friends by Anita Brookner
Anita Brookner
Used - Very Good
Paperback
Penguin Books Ltd
2016-06-02
192
0241977789
9780241977781
N/A
Book picture is for illustrative purposes only, actual binding, cover or edition may vary.
This is a used book - there is no escaping the fact it has been read by someone else and it will show signs of wear and previous use. Overall we expect it to be in very good condition, but if you are not entirely satisfied please get in touch with us.