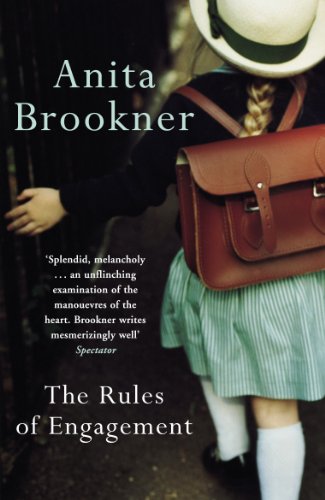 The Rules of Engagement
by Anita Brookner

In Stock
$12.99
inc. GST
Elizabeth and Betsy are old school friends. Born in 1948 and unready for the sixties, they had high hopes of the lives they would lead, even though their circumstances were so different. When they meet again in their thirties, Elizabeth, married to the safe, older Digby is relieving the boredom of a cosy but childless marriage with an affair.
Very Good
6 in stock

The Rules of Engagement Summary

The Rules of Engagement by Anita Brookner

The Rules of Engagement is the twenty second novel by Anita Brookner, the Booker Prize winning author of Hotel du Lac.

Elizabeth and Betsy are old school friends. Born in 1948 and unready for the sixties, they had high hopes of the lives they would lead, even though their circumstances were so different.

When they meet again in their thirties, Elizabeth, married to the safe, older Digby is relieving the boredom of a cosy but childless marriage with an affair. Betsy seems to have found real romance in Paris. Are their lives taking off, or are they just making more of the wrong choices without even realising it?

'One of the most observant moralists writing today. A dark, wintry work and there is plenty here to satisfy Brookner's fans' Guardian

'Her technique as a novelist is so sure and so quietly commanding' Hilary Mantel, Guardian

Anita Brookner was born in south London in 1928, the daughter of a Polish immigrant family. She trained as an art historian, and worked at the Courtauld Institute of Art until her retirement in 1988. She published her first novel, A Start in Life, in 1981 and her twenty-fourth, Strangers, in 2009. Hotel du Lac won the 1984 Booker Prize. As well as fiction, Anita Brookner has published a number of volumes of art criticism.

The Rules of Engagement Reviews

"Beautifully rendered. . . . Unexpectedly and intensely moving." -"The New York Times Book Review
"Few novelists can stand with Anita Brookner when it comes to the interior revelations of the human heart. . . . A single sentence, a certain expression, a look or a gesture convey worlds of meaning. . . . Every page has a felicity of wording that makes you want to reach for a pen, to underline passages that you don't want to forget." -"The Seattle Times
"Beautifully written. . . . The Rules of Engagement" demonstrates the triumph of a keenly introspective mind." -"The Atlantic Monthly
"The Rules of Engagement is vintage Brookner in the grace and ease of its language. The Booker Prize-winning author is a gifted storyteller, weaving in twists and turns that make the book hard to abandon." -"Chicago Tribune
"Elizabeth Wetherall is clearly recognizable as one of Brookner's exquisite gem solitaries. . . . To read Brookner is to come into contact with a first-rate mind. . . . [She] is relentlessly existential. But also comic." -"Miami Herald
"The story is told . . . with such elegance and polish that its surface-satiny, flawless and smooth as an onion, as always-holds a fascination equal to its content." -"The Washington Post Book World
"One of the great strengths of Brookner's fiction: her ability to lay bare in limpid, measured, luminous prose her characters' least admirable, most desperate motivations." -"Los Angeles Times Book Review
"[Brookner renders] her characters with intense fidelity. Few novelists have such a subtle, portrait artist's sense of their characters." -"San Francisco Chronicle
"Brookner is a master of the art of the middle distance andas graceful as a matador when she uses the bright cape of her elegant Jamesian sentences to keep intimacy at bay." -"The Boston Globe

Anita Brookner was born in London in 1928. She trained as an art historian and taught at the Courtauld Institute of Art until 1988. She lives in SW10. THE RULES OF ENGAGEMENT is the 22nd novel from this Booker Prize- winning author.

GOR000615938
The Rules of Engagement by Anita Brookner
Anita Brookner
Used - Very Good
Paperback
Penguin Books Ltd
2004-07-01
256
0141014121
9780141014128
N/A
Book picture is for illustrative purposes only, actual binding, cover or edition may vary.
This is a used book - there is no escaping the fact it has been read by someone else and it will show signs of wear and previous use. Overall we expect it to be in very good condition, but if you are not entirely satisfied please get in touch with us.