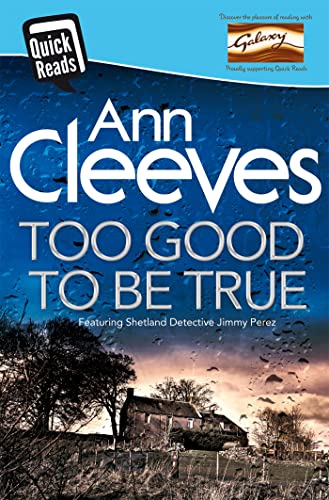 Too Good To Be True
by Ann Cleeves

Too Good To Be True Summary

Too Good To Be True by Ann Cleeves

Too Good To Be True is a gripping Quick Read from Ann Cleeves, featuring Detective Inspector Jimmy Perez from the bestselling Shetland series.

When young teacher Anna Blackwell is found dead in her home, the police think her death was suicide or a tragic accident. After all, Stonebridge is a quiet country village in the Scottish Borders, where murders just don't happen.

But Detective Inspector Jimmy Perez soon arrives from far-away Shetland when his ex-wife, Sarah, asks him to look into the case. The local gossips are saying that her new husband, Tom, was having an affair with Anna. Could Tom have been involved with her death? Sarah refuses to believe it - but needs proof.

Anna had been a teacher. She must have loved kids. Would she kill herself knowing there was nobody to look after her daughter? She had seemed happier than ever before she died. And to Perez, this suggests not suicide, but murder . . .

Customer Reviews - Too Good To Be True

Ann Cleeves is the author behind ITV's Vera and BBC One's Shetland. She has written over twenty-five novels, and is the creator of detectives Vera Stanhope and Jimmy Perez - who are characters loved both on screen and in print. Her books have now sold millions of copies worldwide.

Before she started writing, Ann worked as a probation officer, a cook at a bird observatory and an assistant coastguard. She is a member of 'Murder Squad', working with other British northern writers to promote crime fiction. In 2006 Ann was awarded the Duncan Lawrie Dagger (CWA Gold Dagger) for Best Crime Novel, for Raven Black, the first book in her Shetland series. In 2012 she was enrolled into the CWA Crime Thriller Awards Hall of Fame. Ann lives in North Tyneside.

GOR007272556
Too Good To Be True by Ann Cleeves
Ann Cleeves
Used - Very Good
Paperback
Pan Macmillan
2016-02-04
112
1509806113
9781509806119
N/A
Book picture is for illustrative purposes only, actual binding, cover or edition may vary.
This is a used book - there is no escaping the fact it has been read by someone else and it will show signs of wear and previous use. Overall we expect it to be in very good condition, but if you are not entirely satisfied please get in touch with us.