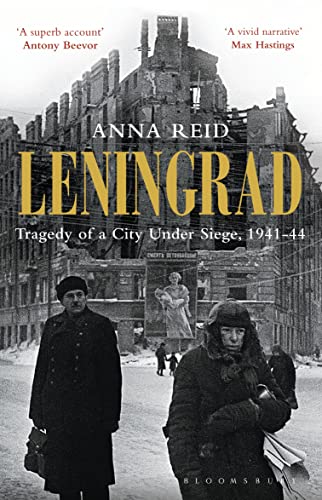 Used Price
23,99 $
inc. GST
Free Shipping in Australia
The siege of Leningrad is one of the great stories of extraordinary and heroic endurance in World War II
Reviews:
Trustpilot
Very Good

When Hitler attacked the Soviet Union in June 1941, he intended to capture Leningrad before turning on Moscow. Soviet resistance forced him to change tactics: with his forward troops only thirty kilometres from the city's historic centre, he decided instead to starve it out. Using newly available diaries and government records, Anna Reid describes a city's descent into hell - the breakdown of electricity and water supply; subzero temperatures; the consumption of pets, joiner's glue and face cream; the dead left unburied where they fell - but also the extraordinary endurance, bravery and self-sacrifice, despite the cruelty and indifference of the Kremlin.

A masterpiece of modern historical writing. With a clear, unsentimental eye and in calm prose, she describes the horrors of the most lethal siege in modern history ... A terrible story, superbly researched and beautifully told * Anthony Beevor, Daily Telegraph Books of the Year *
Magisterial * Orlando Figes, Daily Telegraph Books of the Year *
An admirable retelling of the extraordinary story of the 1941-44 siege ... The author has assembled the testimony of many unfamiliar witnesses, and vividly portrays what some of us consider the most dreadful saga of the Second World War * Max Hastings, The Times Books of the Year *
Impeccably researched, well-paced and beautifully written, Leningrad marks a new benchmark in the study of the subject and a more nuanced, objective interpretation for a new century * Financial Times *
A moving and breathtaking examination of the terrible price extorted by unfettered political power on both sides -- Sally Moris * Daily Mail *

Anna Reid was born in 1965, read law at Oxford and Russian History at UCL's School of Slavonic and East European Studies. She started her career in consultancy and business journalism; from 1993 to 1995 she lived in Kiev, working as Ukraine correspondent for the Economist, and from 2003 to 2007 ran the foreign affairs programme at the think-tank Policy Exchange. She lives in west London.

GOR004101347
Leningrad: Tragedy of a City under Siege, 1941-44 by Anna Reid
Anna Reid
Used - Very Good
Paperback
Bloomsbury Publishing PLC
2012-08-30
528
1408822415
9781408822418
N/A
Book picture is for illustrative purposes only, actual binding, cover or edition may vary.
This is a used book - there is no escaping the fact it has been read by someone else and it will show signs of wear and previous use. Overall we expect it to be in very good condition, but if you are not entirely satisfied please get in touch with us.