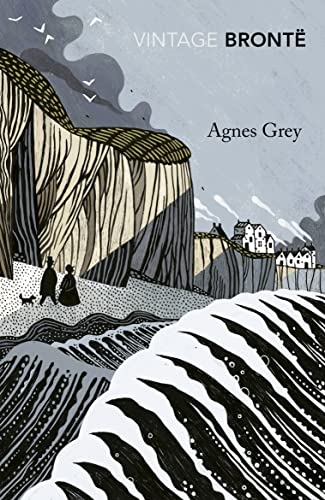 Discover the lesser-known but brilliant novel by the hugely under-appreciated Anne Bronte.

When Agnes's father loses the family savings, young Agnes determines to make her own living - as a governess.

Discover the lesser-known but brilliant novel by the hugely under-appreciated Anne Bronte.

When Agnes's father loses the family savings, young Agnes determines to make her own living - as a governess. Working for the Bloomfields, her enthusiasm is soon dampened by isolation and the cruelty of the children in her charge. Agnes hopes for better in her second job, but when the scheming elder daughter Rosalie makes designs on Agnes's new friend, the kind curate Mr Weston, she feels herself silenced and sidelined. Becoming a governess is one thing, becoming invisible is quite another.

WITH AN INTRODUCTION BY SAMANTHA ELLIS

Agnes Grey is the most perfect prose narrative of English letters... Simple and beautiful... The only story in English literature in which style, characters, and subject are in perfect keeping -- George Moore
For too long [Anne] has been undervalued as the third-best Bronte. But her fiction, exploring the lamentably still current themes of addiction and domestic violence and the abuse of vulnerable women working away from home, has a vigour and bracing satirical intelligence which places her in the first rank of what is arguably the greatest ever generation of novelists in English -- Lucy Hughes-Hallett
Bronte depicts in detail the isolation inherent in a governess's life, as an educated - but by necessity not too educated - woman trapped in an awkward halfway world between the classes * Guardian *

Anne Bronte was born at Thornton in Yorkshire on 17 January 1820, the youngest of six children. That April, the Brontes moved to Haworth, a village on the edge of the moors, where Anne's father had become the curate. Anne's mother died soon afterwards. She was four when her older sisters were sent to the Clergy Daughters' School at Cowan Bridge, where Maria and Elizabeth both caught tuberculosis and died. After that, Anne, Charlotte, Emily and Branwell were taught at home for a few years, and together, they created vivid fantasy worlds which they explored in their writing. Anne went to Roe Head School 1835-7. She worked as a governess with the Ingham
family (1839-40) and with the Robinson family (1840-45). In 1846, along with Charlotte and Emily, she published Poems by Currer, Ellis and Acton Bell. She published Agnes Grey in 1847 and The Tenant of Wildfell Hall in 1848. That year, both Anne's brother Branwell and her sister Emily died of tuberculosis. A fortnight later, Anne was diagnosed with the same disease. She died in
Scarborough on 28 May 1849.

GOR011100441
Agnes Grey by Anne Bronte
Anne Bronte
Used - Well Read
Paperback
Vintage Publishing
2017-01-12
224
1784872393
9781784872397
N/A
Book picture is for illustrative purposes only, actual binding, cover or edition may vary.
This is a used book. We do our best to provide good quality books for you to read, but there is no escaping the fact that it has been owned and read by someone else previously. Therefore it will show signs of wear and may be an ex library book.