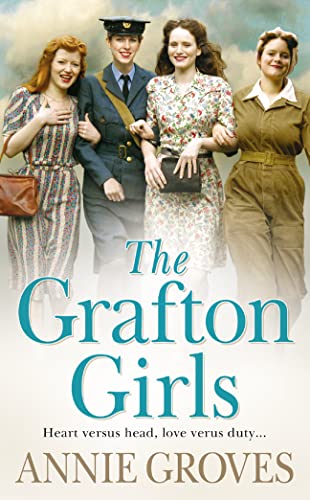 The Grafton Girls
by Annie Groves

The new Liverpool-based World War Two saga from the author of Goodnight Sweetheart is a tale of four very different young women thrown together by war. A unique bond is formed as the hostilities take their toll on Britain.

The Grafton Girls by Annie Groves

The new Liverpool-based World War Two saga from the author of Goodnight Sweetheart is a tale of four very different young women thrown together by war. A unique bond is formed as the hostilities take their toll on Britain.

When Diane Wilson leaves Cambridge for Liverpool, destined for Derby House and war work as a teleprint operator, she is intent on mending her broken heart. But will hundreds of miles ease the pain of her betrayal?

From the moment she first lays eyes on Myra Stone in the Wavertree terrace she is billeted to, Diane senses she's bad news. But does Myra's bitterness and caustic wit belie a secret heartache?

Ruthie starts work at the munitions factory, enduring terrible conditions in order to put food on the table for herself and her widowed mother. But Ruthie is befriended by lively and vivacious Jess Hunt who injects colour and fun into the drab surroundings.

All four women are brought together at The Grafton, the local dance hall favoured by American GIs as well as the local girls. In this heady, uncertain time, infatuation and passion blossom. But has each girl found true love - or true trouble?

'An engrossing story.' My Weekly

'A stirring and heartrending family saga...Against a backdrop of change when the suffragette movement was coming to the fore, the choices and dreams of a generation of women combine to create this passionate story.' Liverpool Daily Post

GOR010595117
The Grafton Girls by Annie Groves
Annie Groves
Used - Like New
Paperback
HarperCollins Publishers
2007-08-06
496
0007209673
9780007209675
N/A
Book picture is for illustrative purposes only, actual binding, cover or edition may vary.
The book has been read, but looks new. The book cover has no visible wear, and the dust jacket is included if applicable. No missing or damaged pages, no tears, possible very minimal creasing, no underlining or highlighting of text, and no writing in the margins.