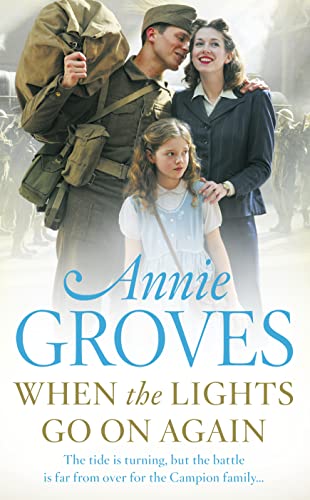 When the Lights Go On Again
by Annie Groves

The tide is turning, but on the home front, the battle is far from over for the Campions...

When the Lights Go On Again Summary

When the Lights Go On Again by Annie Groves

The tide is turning, but on the home front, the battle is far from over for the Campions...

Autumn 1944, the allies are invading Italy. On the home front, the Campion family are doing their bit -working tirelessly in the hope that the end of the war is now in sight.

Sasha, newly engaged to Bobby has been tormented by nameless terrors ever since she was rescued from a bomb shaft. But she needs help if she is to face down her fears and look to the future.

Lou, separated from her twin Sasha, is breaking the mould in her new role as a member of the Air Transport Auxiliary. But she is shaken to her core when a face from her past shows up, the devilishly handsome American GI, Kieran Mallory.

Back in London Katie hopes that she is finally over Luke, the man who broke her heart, until a surprise letter from him arrives. But can they rebuild something stronger on the ashes of their love?

Even though today is full of suffering and pain, there is hope that tomorrow the lights will go on again.

When the Lights Go On Again Reviews

`An engrossing story' My Weekly

`A stirring and heartrending family saga...Against a backdrop of change when the suffragette movement was coming to the fore, the choices and dreams of a generation of women combine to create this passionate story' Liverpool Daily Post

GOR002011430
When the Lights Go On Again by Annie Groves
Annie Groves
Used - Very Good
Paperback
HarperCollins Publishers
2010-08-05
480
0007265948
9780007265947
N/A
Book picture is for illustrative purposes only, actual binding, cover or edition may vary.
This is a used book - there is no escaping the fact it has been read by someone else and it will show signs of wear and previous use. Overall we expect it to be in very good condition, but if you are not entirely satisfied please get in touch with us.