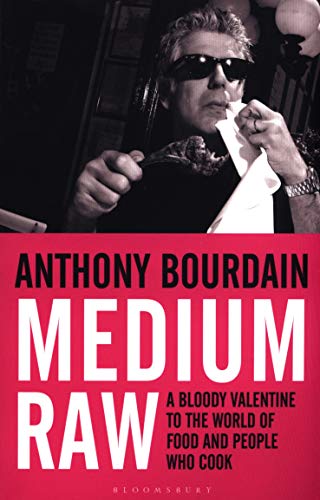 Medium Raw: A Bloody Valentine to the World of Food and the People Who Cook by Anthony Bourdain

A lot has changed since Kitchen Confidential - for the subculture of chefs and cooks, for the restaurant business-and for Anthony Bourdain. Medium Raw explores these changes, moving back and forth from the author's bad old days to the present. Tracking his own strange and unexpected voyage from journeyman cook to globe-travelling professional eater and drinker, Bourdain compares and contrasts what he's seen and what he's seeing, pausing along the way for a series of confessions, rants, investigations, and interrogations of some of the most controversial figures in food. And always he returns to the question: `Why cook?' Or the harder one to answer: `Why cook well?' Beginning with a secret and highly illegal after-hours gathering of powerful chefs he compares to a Mafia summit, Bourdain, in his distinctive, no-holds-barred style, cuts to the bone on every subject he tackles.

'As ferociously rude as anything Bourdain has done before' * Kathryn Hughes, Guardian *
`Terrific ... his love for his subjects - both the food and the cook - sings as it once did in Kitchen Confidential' * Daily Telegraph *
`Bourdain has insight, access and good taste, and he's a naturally engaging writer ... [he] is a hopeless romantic when it comes to food and the people who cook' * New York Times *
`Bourdain is a vivid, bawdy and often foul-mouthed writer. He thrills in the attack, but he is also an enthusiast who writes well about things he holds dear' * Wall Street Journal *

Anthony Bourdain was the bestselling author of Kitchen Confidential: Adventures in the Culinary Underbelly, and the author of the novels: Bone in the Throat, The Bobby Gold Stories and Gone Bamboo. His work appeared in the New York Times, the New Yorker and Food Arts magazine. He was the host of the international CNN television series Parts Unknown.

GOR002941461
Medium Raw: A Bloody Valentine to the World of Food and the People Who Cook by Anthony Bourdain
Anthony Bourdain
Used - Very Good
Paperback
Bloomsbury Publishing PLC
2011-06-06
304
1408809745
9781408809747
N/A
Book picture is for illustrative purposes only, actual binding, cover or edition may vary.
This is a used book - there is no escaping the fact it has been read by someone else and it will show signs of wear and previous use. Overall we expect it to be in very good condition, but if you are not entirely satisfied please get in touch with us.