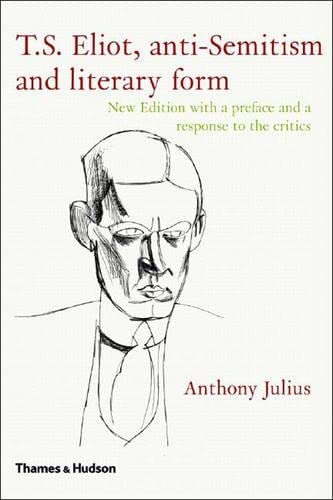 Out of Stock
$28.99
inc. GST
Of the many different kinds of anti-Semite, Eliot was the rarest: one who was able to place his anti-Semitism at the service of his art. This study looks both at the detail of Eliot's deployment of anti-Semite discourse and at the role it played in his greater literary works.
Very Good
Only 0 left

Of the many different kinds of anti-Semite, T.S. Eliot was the rarest: one who placed his anti-Semitism at the service of his art. Contemporary readers of his work are likely to ask themselves certain questions. Is literary merit compatible with expressions of racial contempt? How are those scorned by such work to respond?

Anthony Julius's acclaimed book addresses these important questions in a series of remarkable adversarial readings, which both relate Eliot's anti-Semitism to his greater literary undertaking, and consider it in the context of arguments about the censorship of `offensive' literature.

This new edition of a seminal study includes an introductory chapter telling the story of the critical furore the book provoked on its first publication, and a concluding response, in-depth, to the reassessment of Eliot's work among poets, scholars and readers that has since ensued.

'It has altered the landscape of Eliot scholarship' - Times Literary Supplement
'A greater, and always a more honest, admirer of Eliot than those who habitually plaster him with saintliness ... mould-breaking' - Frederic Raphael
'A long overdue act of critical praise ... Eliot studies will never be the same post-Julius' - Tom Paulin, London Review of Books
'Julius has forced us to rethink some of our most fundamental, received ideas about art, ideas that for years protected Eliot from the sort of scrutiny found in these pages ... He has written an important - and long overdue - book' - Michiko Kakutani, New York Times

Anthony Julius is a British solicitor advocate and academic. He is Deputy Chairman for the London law firm Mishcon de Reya. Julius is known for his opposition to new antisemitism, the expression of antisemitic prejudice couched in terms of certain kinds of discursive assaults on Israel, and gives frequent talks on the subject all over the world to raise awareness. He is a founding member of both Engage and the Euston Manifesto. In 2011 he became chairman of the board of The Jewish Chronicle. Among his previous books are Transgressions and Idolizing Pictures, both published by Thames & Hudson

GOR005340491
T. S. Eliot, anti-Semitism, and literary form by Anthony Julius
Anthony Julius
Used - Very Good
Paperback
Thames & Hudson Ltd
2003-06-09
360
0500282803
9780500282809
N/A
Book picture is for illustrative purposes only, actual binding, cover or edition may vary.
This is a used book - there is no escaping the fact it has been read by someone else and it will show signs of wear and previous use. Overall we expect it to be in very good condition, but if you are not entirely satisfied please get in touch with us.