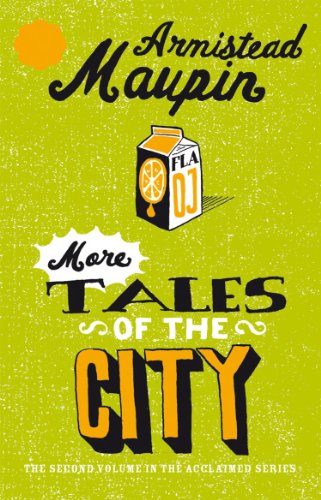 More Tales Of The City
by Armistead Maupin

More Tales Of The City Summary

More Tales Of The City: Tales of the City 2 by Armistead Maupin

____________________ Soon to be a Netflix series starring Ellen Page and Laura Linney . . . 'May well be the funniest series of novels currently in progress' THE TIMES ____________________ The divinely human comedy that began with Tales of the City rolls recklessly along . . . Michael Tolliver pursues his favourite gynaecologist. Mona Ramsey uncovers her roots in a desert whorehouse. And Mary Ann Singleton finds love at sea with the amnesiac of her dreams.

More Tales Of The City Reviews

"Like those of Dickens and Wilkie Collins, Armistead Maupin's novels have all appeared originally as serials... it is the strength of this approach, with its fantastic adventures and astonishingly contrived coincidences, that makes these novels charming and compelling" * Literary Review *
"San Francisco is fortunate in having a chronicler as witty and likeable as Armistead Maupin" * Independent *
"Maupin is a richly gifted comic author" * Observer *
"A consummate entertainer... It is Maupin's Dickensian gift to be able to render love convincingly" * Times Literary Supplement *
"I have read Maupin's first two books three times already and shall probably read them again before too long. I love them for very much the same qualities that make me love the novels of Dickens" -- Christopher Isherwood

Armistead Maupin was born in Washington, D.C. in 1944 but was brought up in Raleigh, North Carolina. A graduate of the University of North Carolina, he served as a naval officer in Vietnam before moving to California in 1971 as a reporter for the Associated Press. In 1976 he launched his daily newspaper serial, Tales of the City, in the San Francisco Chronicle. The first fiction to appear in an American daily for decades, Tales grew into an international sensation when compiled and rewritten as novels. Maupin's six-volume Tales of the City sequence - Tales of the City, More Tales of the City, Further Tales of the City, Babycakes, Significant Others and Sure of You - are now multi-million bestsellers published around the world. He is also the author of two other bestselling novels, Maybe the Moon and The Night Listener, which was recently made into a film starring Robin Williams and Toni Collette. He lives in San Francisco, California. Official Author Web Site: www.ArmisteadMaupin.com

GOR001419677
More Tales Of The City: Tales of the City 2 by Armistead Maupin
Armistead Maupin
Tales of the City
Used - Very Good
Paperback
Transworld Publishers Ltd
1984-09-21
288
055299877X
9780552998772
N/A
Book picture is for illustrative purposes only, actual binding, cover or edition may vary.
This is a used book - there is no escaping the fact it has been read by someone else and it will show signs of wear and previous use. Overall we expect it to be in very good condition, but if you are not entirely satisfied please get in touch with us.