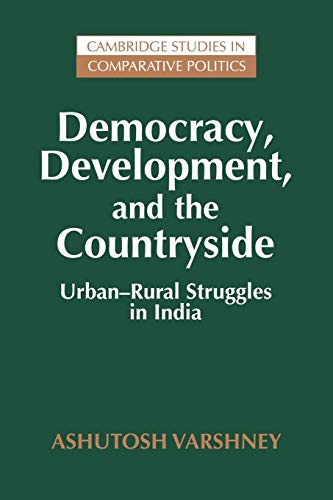 Democracy, Development, and the Countryside
by Albert J. Harnois

Used Price
$47.99
inc. GST
Free Shipping in Australia
What happens to the rural folk - to their power and economic well-being - when development takes place in a democratic framework? Focusing on India, where an exceptional democratic system has flourished for four decades, this book examines how the rural sector uses its numbers in a democracy to further its economic and political interests.
Reviews:
Trustpilot
Very Good

Democracy, Development, and the Countryside Summary

Democracy, Development, and the Countryside: Urban-Rural Struggles in India by Albert J. Harnois

Several scholars have written about how authoritarian or democratic political systems affect industrialization in the developing countries. There is no literature, however, on whether democracy makes a difference to the power and well-being of the countryside. Using India as a case where the longest-surviving democracy of the developing world exists, this book investigates how the countryside uses the political system to advance its interests. It is first argued that India's countryside has become quite powerful in the political system, exerting remarkable pressure on economic policy. The countryside is typically weak in the early stages of development, becoming powerful when the size of the rural sector defies this historical trend. But an important constraint on rural power stems from the inability of economic interests to overpower the abiding, ascriptive identities, and until an economic construction of politics completely overpowers identities and non-economic interests, farmers' power, though greater than ever before, will remain self-limited.

Democracy, Development, and the Countryside Reviews

"This is the definitive study of how India's bureaucrats, politicians and organized agrarian interests transformed India's agricultural policies. Varshney shows how the politically mobilized agrarian sector was able to overcome the urban-bias that has impeded agricultural growth elsewhere in the late developing countries. An outstanding contribution to the political economy literature." Myron Weiner, Massachusetts Institute of Technology
"The author has produced a truly exceptional book. His clear style, comparative focus, and methodologically sophisticated approach make this book a major contribution to the field of political economy, comparative politics and Indian Studies. Varshney has established himself as one of the leading young scholars in the field." Stanley A. Kochanek, Studies in Comparative International Development
"In this important book, Varshney pits established wisdom about agrarian politics and urban bias with the data from India, one of the most significant cases in Third World development. The result is a substantial and exciting reappraisal of what we thought we knew. We learn much about the impact of political insitutions, about the significance of democracy, and about the limits of rural power. A major work." Robert H. Bates, Harvard University
"Democracy, Development, and the Countryside: Urban-Rural Struggles in India is a fascinating and important book. For the first time in the modern political economy literature, Varshney is able to examine in depth the inherent conflicts in a poor, democratic, society between basic macroeconomic balance and the political voice of an enfranchized rural majority. This book is of interest to both economists and political scientists, and as much for the perspective offered to each other's disciplines as for the direct contribution....a meticulously researched and crisply argued volume." C. Peter Timmer, Harvard University

Preface; Introduction; 1. Town-Country struggles in development; 2. Nehru's agricultural policy: a Reconstruction; 3. Policy change in the mid-1960s; 4. Rise of Agrarian power in the 1970s; 5. Organizing the countryside in the 1980s; 6. Has rural India lost out?; 7. Paradoxes of power and the intracacies of economic policy; 8. Conclusion: democracy and the countryside; Endnotes.

GOR010342090
Democracy, Development, and the Countryside: Urban-Rural Struggles in India by Albert J. Harnois
Albert J. Harnois
Cambridge Studies in Comparative Politics
Used - Very Good
Paperback
Cambridge University Press
1998-09-18
232
0521646251
9780521646253
N/A
Book picture is for illustrative purposes only, actual binding, cover or edition may vary.
This is a used book - there is no escaping the fact it has been read by someone else and it will show signs of wear and previous use. Overall we expect it to be in very good condition, but if you are not entirely satisfied please get in touch with us.