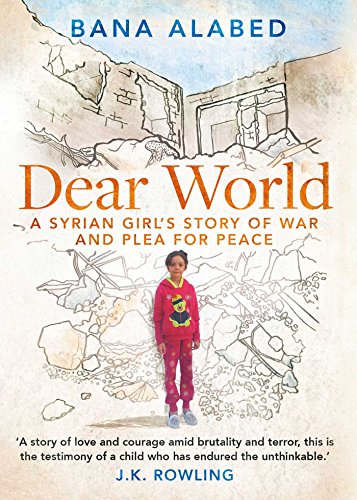 A poignant memoir and manifesto from social media sensation, Bana Alabed, an eight-year-old Syrian girl from Aleppo who has become a global symbol and advocate for refugee rights.

Dear World: A Syrian Girl's Story of War and Plea for Peace by Bana Alabed

'A story of love and courage amid brutality and terror, this is the testimony of a child who has endured the unthinkable.' J. K. ROWLING

When eight-year-old Bana Alabed took to Twitter to describe the horrors she and her family were experiencing in war-torn Syria, her heartrending messages touched the world and gave a voice to millions of innocent children.

Bana's happy childhood was abruptly upended by civil war when she was only three years old.

Over the next four years, she knew nothing but bombing, destruction and fear. Her harrowing ordeal culminated in a brutal siege where she, her parents, and two younger brothers were trapped in Aleppo, with little access to food, water, medicine, or other necessities.

Facing death as bombs relentlessly fell around them, one of which completely destroyed their home, Bana and her family embarked on a perilous escape to Turkey.

In Bana's own words, and featuring short, affecting chapters by her mother, Fatemah, Dear World is not just a gripping account of a family endangered by war; it offers a uniquely intimate, child's perspective on one of the biggest humanitarian crises in history.

Bana has lost her best friend, her school, her home and her homeland. But she has not lost her hope - for herself and for other children around the world who are victims and refugees of war and deserve better lives.

Dear World is a powerful reminder of the resilience of the human spirit, the unconquerable courage of a child, and the abiding power of hope. It is a story that will leave you changed.
GOR008659043
9781471169557
1471169553
Dear World: A Syrian Girl's Story of War and Plea for Peace by Bana Alabed
Bana Alabed
Used - Very Good
Hardback
Simon & Schuster Ltd
2017-10-01
224
N/A
Book picture is for illustrative purposes only, actual binding, cover or edition may vary.
This is a used book - there is no escaping the fact it has been read by someone else and it will show signs of wear and previous use. Overall we expect it to be in very good condition, but if you are not entirely satisfied please get in touch with us
Trustpilot