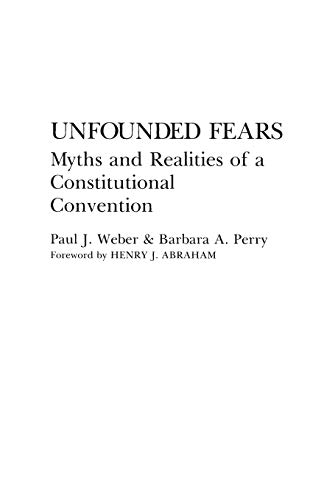 Since the first and only constitutional convention in 1787, 26 amendments have been added to our governing document, but not one of them became law by virtue of the convention method.

Unfounded Fears: Myths and Realities of a Constitutional Convention by Barbara Perry

Since the first and only constitutional convention in 1787, 26 amendments have been added to our governing document, but not one of them became law by virtue of the convention method. Despite more than 400 applications, no constitutional convention has been called in 202 years. Indeed it was James Madison who wrote, "Having witnessed the difficulties and dangers experienced by the first Convention. . . . I should tremble for the result of a Second." In Unfounded Fears: Myths and Realities of a Constitutional Convention, Weber and Perry present a balanced, scholarly look on this controversial topic and introduce surprising conclusions.

Weber and Perry seek to determine if, in fact, the first convention was a runaway, as common wisdom holds, and they examine the process by which the Convention was called. They also review the attempts since 1787 to call a second constitutional convention, and they confront many of the questions commonly raised about a potential convention, including the process for electing delegates and the ability of Congress to establish and control the convention's procedures and substance of what a convention does. In their final chapter, they reflect on the realities of a balanced-budget amendment.

PAUL J. WEBER is Professor and Chairman of the Department of Political Science at the University of Louisville. He wrote Private Churches and Public Money (Greenwood Press, 1981) and contributed to numerous publications including The Review of Politics, Polity, The Journal of Law and Politics, and several law reviews.

BARBARA A. PERRY is an Assistant Professor of Political Science at Sweet Briar College. She has written articles for the Journal of Church and State and the Journal of Law and Politics and is at work on another book regarding the U.S. Supreme Court's Catholic Seat.

Foreword by Henry J. Abraham Introduction Did the First Convention Run Away? Madison's Opposition to a Second Convention The History of Attempts to Call a Constitutional Convention What State Conventions Can Teach Us The Constitutional Convention: A Safe Political Option Reflections on a Balanced Budget Amendment Appendices Selected Bibliography Index
NLS9780275933470
9780275933470
0275933474
Unfounded Fears: Myths and Realities of a Constitutional Convention by Barbara Perry
Barbara Perry
New
Paperback
ABC-CLIO
1989-11-16
189
N/A
Book picture is for illustrative purposes only, actual binding, cover or edition may vary.
This is a new book - be the first to read this copy. With untouched pages and a perfect binding, your brand new copy is ready to be opened for the first time
Trustpilot