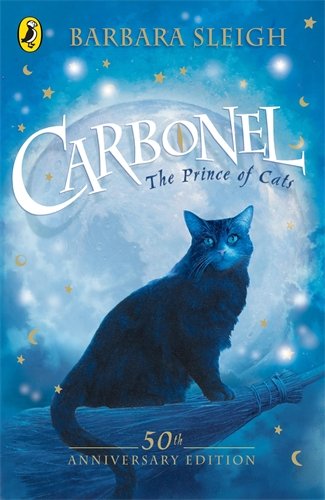 In Stock
$10.49
+10% GST
This delightful fantasy is back in print after more than 30 years. Rosemary's plan to clean houses during her summer break and surprise her mother with the money hits a snag when an old lady at the market talks her into buying a second-rate broom and a cat she can't even afford to keep.
Very Good Good
8 in stock

This is the story of a cat, a broomstick and an ordinary schoolgirl called Rosemary. She bought them both in the market, quite cheaply. Of course, neither the cat nor the broomstick were just what they seemed, and they turned up just when Rosemary badly needed something nice to happen to her. A good cat is apt to be independent, so she did not have things all her own way, and as Carbonel proved to be a Royal cat in a very special sense, that was understandable. Between the cat and the broomstick, Rosemary picked up some useful spells and magic, and the adventures they brought about turned a dull-looking holiday into one long to be remembered for its unexpected excitements and rewards.

"A delightful fantasy of real literary merit. When Rosemary acquired a black cat and an old broom, she thought she had a pet and a means of earning money for widowed mother. But Carbonel was magic, and at his behest she set out to acquire a witch's hat, pot and spell to disenchant him. How she does this will enthrall children. A "must" for all libraries." -Library Journal
"The children are lively, the grown-ups (including the witch) colorful and the mingling of magic and reality is most effective. -New York Times
"A delightfully amusing story." -Parents Magazine
"It's a highly diverting fantasy, told exactly as though it all could happen." -Chicago Tribune
"We do like good fantasy, and it is hard to find. Here is some magic sturdily rooted in everyday happenings with both the real children and their enchanted acquaintances well characterized and sharing in some very convincing experiences." -New York Herald Tribune
"A truly bewitching story reminiscent of "Alice in Wonderland,"" -New York Journal American
"A highly entertaining fantasy." -San Francisco Chronicle
"Magic and everyday life blend smoothly in this highly enjoyable fantasy, perfect for reading aloud." -Terri Schmitz, Horn Book

Barbara Sleigh was born in 1906 in Warwickshire. She took an art teacher's training course, and later began to write stories for children for radio. She was a lecturer at Goldsmiths' Teacher Training College, then in 1933 joined the staff of BBC Children's Hour. There she met and married David Davis, who later became Head of Children's Hour. Her first children's book, Carbonel, which was to become the first of a trilogy, was published in 1955 and has remained a firm favourite with younger readers.

GOR001413598
Carbonel by Barbara Sleigh
Barbara Sleigh
A Puffin Book
Used - Very Good
Paperback
Penguin Books Ltd
2005-08-25
240
0141319739
9780141319735
N/A
Book picture is for illustrative purposes only, actual binding, cover or edition may vary.
This is a used book - there is no escaping the fact it has been read by someone else and it will show signs of wear and previous use. Overall we expect it to be in very good condition, but if you are not entirely satisfied please get in touch with us.