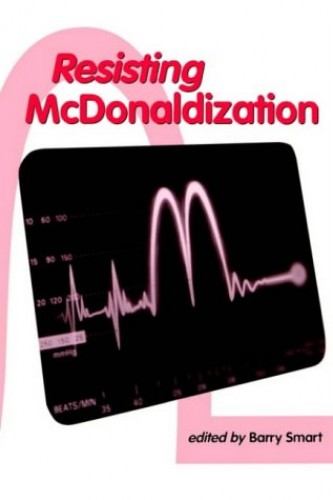 The McDonaldization thesis argued that contemporary life is succumbing to the standardization, flexibility and predictability of fast-food service. This text makes a critical appraisal of the thesis, discussing the rationalization of modern life, consumer culture and modern citizenship.

George Ritzer's McDonaldization thesis argued that contemporary life is succumbing to the standardization, flexibility and practicability of fast-food service. This book brings together specially commissioned papers by leading social and cultural analysts to engage in a critical appraisal of the thesis.

The contributors discuss the roots of the thesis, the rationalization of late modern life, the effects of increasing cultural commodification, the continuing prominence of American cultural and economic imperialism and the impact of globalization on social and cultural life. The strengths and weaknesses of the McDonaldization thesis are clearly evaluated and the irrational consequences of rationalization are pinpointed and critically developed. The book enlarges our understanding of how everyday life is structured by new standards of bureaucratic control and performance-related criteria and plays a major role in illuminating how identity and practice are structured today. The volume concludes with a response from George Ritzer.

`An impressively wide-ranging collection of critical responses to, and applications of, Ritzer's thesis, including contributions by some of the world's leading social theorists and held together by Barry Smart's comprehensive introduction and Ritzer's own detailed response to his admirers and critics. The 'Ritzer thesis', as it has come to be know, has of course found a massive response, admirably captured in this volume' - William Outhwaite, University of Sussex

`Consumer capitalism may be spreading everywhere, but not without opposition. As Resisting McDonaldization shows, a wide variety of people and movements struggle to maintain the local, to combine economic development with greater equality and justice, and to pursue alternative visions of the global future. The essays are trenchant and timely' - Craig Calhoun, New York University, USA

Barry Smart is Professor of Sociology at the University of Portsmouth and has longstanding research interests in the fields of social theory, political economy, and philosophy. His research interests include critical social research ethics; higher education; and collaborative work on veganism, ethics, lifestyle and environment.
Resisting McDonaldization - Barry Smart Theory, Process and Critique Golden Arches and Iron Cages - Christiane Bender and Gianfranco Poggi McDonaldization and the Poverty of Cultural Pessimism at the End of the Twentieth Century Have You Had Your Theory Today? - John O'Neill McDonaldization Enframed - Deena Weinstein and Michael A Weinstein Rich Food - Joanne Finkelstein McDonald's and Modern Life McCitizens - Bryan Turner Risk, Coolness and Irony in Contemporary Politics Theme Parks and McDonaldization - Alan Bryman The McDonaldization of Sport and Leisure - David Jary McDonaldized Culture - The End of Communication? - Richard M[um]unch Art Centres - Gary Alan Fine Southern Folk Art and the Splintering of a Hegemonic Market Dennis Hopper, McDonald's and Nike - Norman K Denzin Theorizing/Resisting McDonaldization - Douglas Kellner A Multiperspectivist Approach The Moral Malaise of McDonaldization - Keith Tester The Values of Vegetarianism McFascism? Reading Ritzer, Bauman and the Holocaust - Peter Beilharz Assessing the Resistance - George Ritzer
GOR001301975
Resisting McDonaldization by Barry Smart
Barry Smart
Used - Very Good
Paperback
SAGE Publications Inc
1999-04-16
272
0761955186
9780761955184
N/A
Book picture is for illustrative purposes only, actual binding, cover or edition may vary.
This is a used book - there is no escaping the fact it has been read by someone else and it will show signs of wear and previous use. Overall we expect it to be in very good condition, but if you are not entirely satisfied please get in touch with us.
Trustpilot