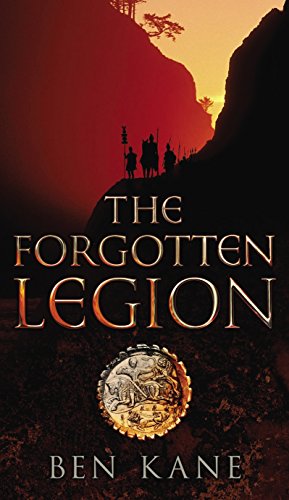 The Forgotten Legion
by Ben Kane

Used Price
$39.99
inc. GST
Free Shipping in Australia
Romulus and Fabiola are twins, born into slavery after their mother is raped by a drunken nobleman on his way home from a good night out.
Reviews:
Trustpilot
Very Good

Romulus and Fabiola are twins, born into slavery after their mother is raped by a drunken nobleman on his way home from a good night out. At 13 years old, they and their mother are sold: Romulus to gladiator school, Fabiola into prostitution, where she will catch the eye of one of the most powerful men in Rome, and their mother into obscurity and death in the salt mines. Tarquinius is an Etruscan, a warrior and soothsayer, born enemy of Rome, but doomed to fight for the Republic in the Forgotten Legion. Brennus is a Gaul; the Romans killed his entire family. He rises to become one of the most famous and feared gladiators of his day - and mentor to the boy slave, Romulus, who dreams night and day of escape and of revenge. The lives of these four characters are bound and interwoven in a marvellous story which begins in a Rome riven by corruption, violence and political enmities, but ends far away, where Romulus, Brennus and Tarquinius find themselves fighting against the Parthians and overwhelming odds.

"I thoroughly enjoyed THE FORGOTTEN LEGION - so much so that I stayed up until 2am to finish it. Where others play in the rarefied world of senators, legates and upper class merchants, Kane delves into the grim underbelly of slavery, prostitution and gladiatorial carnage; a place where life is cheap and the thirst of the conquerors for the blood of the conquered knows no bounds. Here, we smell the grime, lie on the cold floors, face death daily with little to live for beyond the faint spark of hope that one day there might be revenge. His creation of the Etruscan Haruspex is fantastic - a man of a defeated nation who can yet give hope, and does so, to both Roman and captive alike...and the conclusion leaves us waiting for the sequel." -- Manda Scott * author of the 'Boudica' novels *
"Historical fiction has never been more visceral and engaging than Ben Kane's debut novel THE FORGOTTEN LEGION. Bloody, fast-paced, thrilling...what Wilbur Smith did for Egypt, Kane does for ancient Rome. Written in a cinematic style, Kane paints his lost world with such fervency that you'll swear you hear the thunder of the colisseum and the roar of the lions in the pit. here is a masterful debut that shouldn't be missed!" * James Rollins, bestselling author of THE LAST ORACLE *

Ben Kane was born in Kenya and raised there and in Ireland. He studied veterinary medicine at University College Dublin but after that he travelled the world extensively, indulging his passion for ancient history. Now he lives in North Somerset, where he researches, writes and practises as a small animal vet. The Forgotten Legion, born of a lifelong fascination with military history in general, and Roman history in particular, is his first novel. For more information please visit www.benkane.net