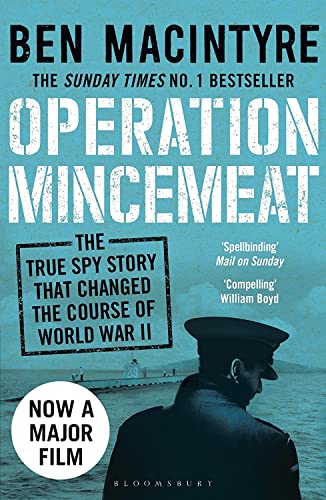 In Stock
$22.49
inc. GST
From the bestselling author of Agent Zigzag. The thrilling true story of the greatest and most successful wartime deception ever attempted A Richard & Judy Book Club selection
Very Good Good
6 in stock

A RICHARD AND JUDY BOOK CLUB SELECTION One April morning in 1943, a sardine fisherman spotted the corpse of a British soldier floating in the sea off the coast of Spain and set in train a course of events that would change the course of the Second World War. Operation Mincemeat was the most successful wartime deception ever attempted, and certainly the strangest. It hoodwinked the Nazi espionage chiefs, sent German troops hurtling in the wrong direction, and saved thousands of lives by deploying a secret agent who was different, in one crucial respect, from any spy before or since: he was dead. His mission: to convince the Germans that instead of attacking Sicily, the Allied armies planned to invade Greece. The brainchild of an eccentric RAF officer and a brilliant Jewish barrister, the great hoax involved an extraordinary cast of characters including a famous forensic pathologist, a gold-prospector, an inventor, a beautiful secret service secretary, a submarine captain, three novelists, a transvestite English spymaster, an irascible admiral who loved fly-fishing, and a dead Welsh tramp. Using fraud, imagination and seduction, Churchill's team of spies spun a web of deceit so elaborate and so convincing that they began to believe it themselves. The deception started in a windowless basement beneath Whitehall. It travelled from London to Scotland to Spain to Germany. And it ended up on Hitler's desk. Ben Macintyre, bestselling author of Agent Zigzag, weaves together private documents, photographs, memories, letters and diaries, as well as newly released material from the intelligence files of MI5 and Naval Intelligence, to tell for the first time the full story of Operation Mincemeat.

'A rollicking read for all those who enjoy a spy story so fanciful that Ian Fleming - himself an officer in Montagu's wartime department - would never have dared to invent it' * Max Hastings, Sunday Times *
'Ben Macintyre, also the author of the acclaimed Agent Zigzag, is fast becoming a one-man industry in these updated tales of cunning, bravery and skulduggery. With his mix of meticulous research and a good hack's eye for narrative, it is hard to think of a better guide to keep beckoning us back to that fascinating world' * Observer *
'Even more spellbinding than his previous story of wartime espionage, Agent Zigzag, with a cast-list every bit as dotty and colourful ... Macintyre is a master of the thumbnail character sketch' * Mail on Sunday *
'Astonishing ... sheds riveting new light on this breathtaking plan' * Daily Mail *

Ben Macintyre is a columnist and Associate Editor on The Times. He has worked as the newspaper's correspondent in New York, Paris and Washington. He is the author of seven previous books including Agent Zigzag, the story of wartime double-agent Eddie Chapman, which was shortlisted for the Costa Biography Award and the Galaxy British Book Award for Biography of the Year 2008. He lives in London with his wife and three children.

GOR008113875
Operation Mincemeat: The True Spy Story that Changed the Course of World War II by Ben Macintyre
Ben Macintyre
Used - Very Good
Paperback
Bloomsbury Publishing PLC
2016-09-22
432
1408885395
9781408885390
N/A
Book picture is for illustrative purposes only, actual binding, cover or edition may vary.
This is a used book - there is no escaping the fact it has been read by someone else and it will show signs of wear and previous use. Overall we expect it to be in very good condition, but if you are not entirely satisfied please get in touch with us.