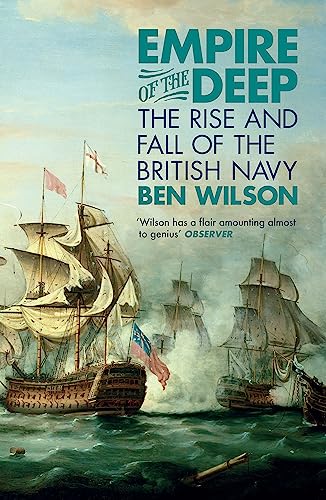 Empire of the Deep
by Ben Wilson

In Stock
22,49 $
inc. GST
The bestselling complete history of the British Navy - our national story through a different prism.
Like New Very Good Good Well Read
Only 2 left

Empire of the Deep Summary

Empire of the Deep: The Rise and Fall of the British Navy by Ben Wilson

The bestselling complete history of the British Navy - our national story through a different prism.

The story of our navy is nothing less than the story of Britain, our culture and our empire. Much more than a parade of admirals and their battles, this is the story of how an insignificant island nation conquered the world's oceans to become its greatest trading empire. Yet, as Ben Wilson shows, there was nothing inevitable about this rise to maritime domination, nor was it ever an easy path.

EMPIRE OF THE DEEP: THE RISE AND FALL OF THE BRITISH NAVY also reveals how our naval history has shaped us in more subtle and surprising ways - our language, culture, politics and national character all owe a great debt to this conquest of the seas. This is a gripping, fresh take on our national story.

Empire of the Deep Reviews

One of our finest young historians...With such a variety of peaks and troughs to choose from, this book can only generate discussion: it is, in its essence, a book about rise and fall that explodes the notion of rise and fall. It is a wonderful book because it does not tell the answer from on high but, instead, it asks the question: what do you think? * DAILY TELEGRAPH *
Wilson tackles this formidable canvas with zeal and spirit. He is strong on strategy and analysis, yet also throws himself into the great battle scenes, of which his account of the battle of the Nile in 1798 is particularly effective. * NEW STATESMAN *
Compelling...Wilson's mastering of 1,500 years of naval history is no small achievement. * SUNDAY TIMES *
Superb...crisply and clearly composed by Ben Wilson -- BOOK OF THE WEEK * THE TIMES *
My only regret was in finishing this fascinating and thought-provoking account. * THE SPECTATOR *
The fighting, blood-and-guts side of naval life is portrayed by Wilson with great skill...A charming book. -- Kwasi Kwarteng * EVENING STANDARD *
Spanning the period since the Romans left until now, Empire of the Deep: The Rise and Fall of the British Navy is a sprawling, magisterial account of how Brittania came to rule the waves. * METRO *
The author...writes with such brio and passion about the subject. * THE CATHOLIC HERALD *
Wilson has a brilliant flair for addressing very current questions with reference to the past. * BBC WHO DO YOU THINK YOU ARE? *
Wilson charts and celebrates a 1,000-year love affair between our islands and the seaborne branch of the armed forces...The sea boils and timbers creak as you read this smart, salty, invigorating work. -- Dan Jones * THE DAILY TELEGRAPH, Books of the Year *
Empire of the Deep by Ben Wilson is an engaging history of the British navy from King Alfred to the Thames pageant at last year's Diamond Jubilee. * CHOICE MAGAZINE *
In this enlightening book, the author rightly argues that it is necessary to go back more than a thousand years to understand the history of the Royal Navy. * GOOD BOOK GUIDE *
An entertaining and erudite tale * WARSHIPS INTERNATIONAL FLEET REVIEW *

Born in 1980, Ben Wilson's first book was published when he was just 24, and he is one of our most acclaimed young historians. He lives in Suffolk.

GOR006446760
Empire of the Deep: The Rise and Fall of the British Navy by Ben Wilson
Ben Wilson
Used - Like New
Paperback
Orion Publishing Co
2014-09-11
720
0753829207
9780753829202
N/A
Book picture is for illustrative purposes only, actual binding, cover or edition may vary.
The book has been read, but looks new. The book cover has no visible wear, and the dust jacket is included if applicable. No missing or damaged pages, no tears, possible very minimal creasing, no underlining or highlighting of text, and no writing in the margins.