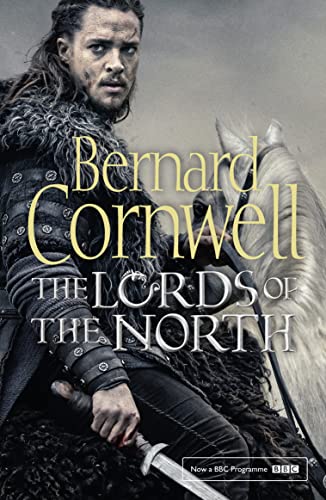 The year is 878. Uhtred of Bebbanburg, fresh from fighting for Alfred the Great, must journey north with a band of men to avenge his father, who has been cut down by the Danish lord Kjartan, Uhtred's oldest enemy.

But the north is a realm of chaos, rebellion and bloody retribution. As he plans his revenge attack, Uhtred is betrayed and ends up on a slave voyage to Iceland. Friends and alliances must unite to free him, and fight once more in the battle for England.

Praise for The Lords of the North:

'Beautifully crafted story-telling, complete with splendid set-piece battles and relentless derring-do, so gripping that it rarely stops to catch a breath. It demonstrates once again Cornwell's enormous skill as a historical narrator. He would have graced Alfred's court entertaining the guests with his stories' Daily Mail

'Bernard Cornwell is a literary miracle. Year after year, hail, rain, snow, war and political upheavals fail to prevent him from producing the most entertaining and readable historical novels of his generation' Daily Mail

'Cornwell's narration is quite masterly and supremely well-researched' Observer

GOR008421984
The Lords of the North (The Last Kingdom Series, Book 3) by Bernard Cornwell
Bernard Cornwell
The Last Kingdom Series
Used - Very Good
Paperback
HarperCollins Publishers
2017-03-23
400
0008139490
9780008139490
N/A
Book picture is for illustrative purposes only, actual binding, cover or edition may vary.
This is a used book - there is no escaping the fact it has been read by someone else and it will show signs of wear and previous use. Overall we expect it to be in very good condition, but if you are not entirely satisfied please get in touch with us.