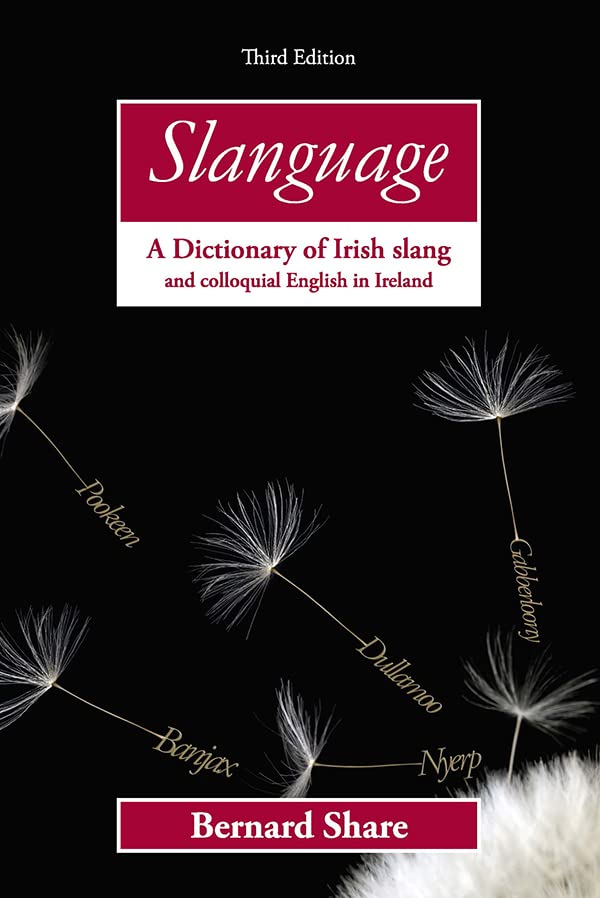 Doolally, on the batter, Belfast confetti, pure mule, crawthumper, flag hopper and fecker...come here till I tell you! Hiberno-English is the common speech of Ireland at all social levels. Its continuing vigour and individuality is triumphantly illustrated here.

Slanguage: A Dictionary of Irish Slang and Colloquial English in Ireland by Bernard Share

Drawing on a rich heritage of Irish, English, Ulster Scots, Shelta, Hindustani, Swahili and many other linguistic resources, Hiberno-English has retained both its inventiveness and its vigour in a country which now plays host to some 167 languages, suggesting that Ireland will continue to make new words for old in the spirit of its own highly distinctive idiom.

From the reviews of previous editions

'This is worth its weight in gold-dust, for at last we have a proper, and often improper, dictionary of Irish slang.' Hugh Leonard, Sunday Independent

'Joyce would have loved it.' John Boland, The Times (London)

'The book can take its place on the shelf beside the great Eric Partridge himself and there is no greater tribute.' Sean McMahon, Irish Independent

'Much of the book is a joy to read.' Brian Griffin, International Journal of Lexicography

'This is quite simply an outstandingly brilliant piece of Sherlock-Holmesing, characterised by both authenticity and wit.' Aubrey Malone, Books Ireland

Bernard Share is a distinguished critic, writer and teacher. He is a former editor of Cara, the Aer Lingus in-flight magazine; the author of many books, including the bestselling The Emergency, a popular account of Irish life during World War II and the hilarious Inish, a novel originally published in 1966 and re-issued in 2009: Spike Milligan said on more than one occasion that it was the funniest book he had ever read. Bernard Share has been a lecturer in modern literature both in Ireland and Australia. The previous editions of Slanguage appeared to critical and commercial acclaim.

GOR005937980
Slanguage: A Dictionary of Irish Slang and Colloquial English in Ireland by Bernard Share
Bernard Share
Used - Very Good
Paperback
Gill
2008-09-12
432
0717143902
9780717143900
N/A
Book picture is for illustrative purposes only, actual binding, cover or edition may vary.
This is a used book - there is no escaping the fact it has been read by someone else and it will show signs of wear and previous use. Overall we expect it to be in very good condition, but if you are not entirely satisfied please get in touch with us.