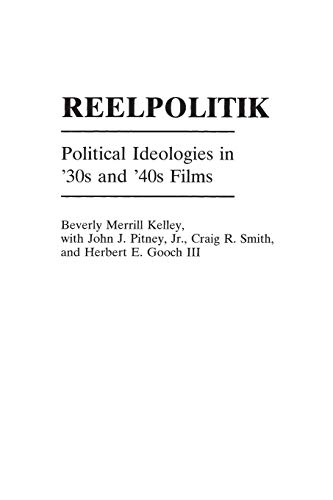 With reference to eight classic American movies, including "Mr Smith Goes to Washington", "Citizen Kane", "Casablanca" and "All Quiet on the Western Front", this text explores the political ideologies thrumming through the American psyche during a period of national catastrophe and triumph.

The movies that document American history during the interwar years still hold relevance today. While we may be put off by the corny sentimentality popular at the time, we feel attracted, despite our 1990s veneer of sophistication, to healthy portions of unadulterated American spirit. Americans resist encumbering themselves with political labels, Kelley asserts, content to remain simultaneously fragmented between elitism and populism, isolationism and interventionism even today, yet remain somehow united by a fundamental essence they can't quite define but readily recognize as the American can-do attitude.

Using the unique vantage point of eight classic American movies-Mr. Smith Goes to Washington, Magnificent Ambersons, Gabriel Over the White House, Citizen Kane, Casablanca All Quiet on the Western Front, Daily Bread, and The Fountainhead-Kelley and her colleagues explore the political ideologies thrumming through the American psyche. The stock market crash and ensuing depression proved a defining experience. For the first time, the national psyche was sent careening toward alien political ideologies; the seductiveness of communism and fascism took hold in the wreckage wrought by the Depression. American foreign policy likewise fluctuated from the isolationist stance adopted after fighting the war to end all wars to an interventionist response to the intensifying pressure to vanquish communist and fascist bullies. Students, scholars, and the general public will find intriguing insights on a period of national catastrophe and triumph.

BEVERLY MERRILL KELLEY is Professor and Chair of the Communication Arts Department at California Lutheran University. In addition to numerous academic articles and papers, she writes a newspaper column, hosts a weekly radio show on a National Public Radio affiliate and a television show on a local educational channel. She is a regular contributor to the Los Angeles Times.