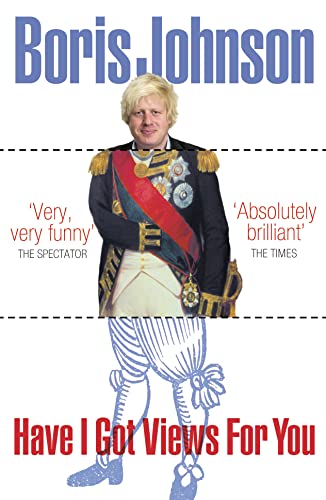 Have I Got Views For You
by Boris Johnson

In his own inimitable style, Boris Johnson, the new Mayor of London, turns his attention to the culture, manners and morals of British society, giving us a humorous, at times furious, but always entertaining read.

Have I Got Views For You Summary

Have I Got Views For You by Boris Johnson

In his own inimitable style, Boris Johnson, the new Mayor of London, turns his attention to the culture, manners and morals of British society, giving us a humorous, at times furious, but always entertaining read.

A witty anthology of pieces comprising Boris Johnson's thoughts on everything from Tony Blair to the idiosyncrasies of modern British culture.

With new artilces on subjects as varied as Iraq, football, population control and bike theft, Johnson takes us on a rollercoaster ride through contemporary Britain. He has also interviewed many of the key figures in the political and cultural worlds over the last sixteen years and addresses what these personalities tell of our age.

Boris Johnson is one of the great political characters of our time and his writings have appeared in a variety of British and American magazines and newspapers. Vigorous, idiosyncratic, always intelligent and informed, with a very interesting perspective on our times, `Have I Got Views For You' is a pleasure to read.

Have I Got Views For You Reviews

Praise for `Have I Got Views for You':

'Johnson is a good-humoured, entertaining commentator, with an agreeably optimistic bent.' Observer

Praise for 'The Dream of Rome':

'As an introduction to the history of the Roman empire, this book is hugely stimulating. I read it in two sittings, completely gripped. If Ruth Kelly has an ounce of sense, she will make this book compulsory reading for every 16-year old in the country.' Toby Young, New Statesman

'History comes alive only when written from the heart and Johnson's is full of swashbuckling japes, bloodthirsty yells and energetic sideswipes.' Craig Brown, Mail on Sunday

'Written with all the wit and zest that have helped to make him Britain's favourite celebrity MP.' Tom Holland, Daily Telegraph

'Johnson has not been intimidated by dry classics masters: his style is bright, breezy, populist and pacy' The Times

'Described with his special combination of sharp-eyed intelligence and golly-gosh exclamation...the sublime and the bizarre are richly represented in this portrayal of ancient Rome...a splendid romp through the Roman world' Sunday Telegraph

Boris Johnson was elected Mayor of London in 2008. He is the former Member of Parliament for Henley-on-Thames and member of the shadow cabinet. He has worked as an author and journalist, and until 2005 was the editor of the Spectator magazine. He is married and lives in London and Oxfordshire.

GOR010008675
Have I Got Views For You by Boris Johnson
Boris Johnson
Used - Like New
Paperback
HarperCollins Publishers
2008-06-16
448
0007290969
9780007290963
N/A
Book picture is for illustrative purposes only, actual binding, cover or edition may vary.
This is a used book - there is no escaping the fact it has been read by someone else and it will show signs of wear and previous use. Overall we expect it to be in very good condition, but if you are not entirely satisfied please get in touch with us.