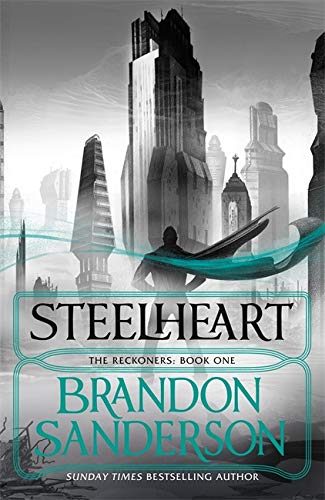 The first book in a new, action-packed thrill ride of a series, from the No.1 NEW YORK TIMES bestselling author of the Mistborn Trilogy and THE WAY OF KINGS.

Ten years ago, Calamity came. It was a burst in the sky that gave ordinary men and women extraordinary powers. The awed public started calling them Epics. But Epics are no friend of man. With incredible gifts came the desire to rule. And to rule man you must crush his wills.

Nobody fights the Epics... nobody but the Reckoners. A shadowy group of ordinary humans, they spend their lives studying Epics, finding their weaknesses, and then assassinating them.

And David wants in. He wants Steelheart - the Epic who is said to be invincible. The Epic who killed David's father. For years, like the Reckoners, David's been studying, and planning - and he has something they need. Not an object, but an experience.

Steelheart is the literature equivalent of a blockbuster; episodic and fast-paced with surprises around every turn. * SCI FI NOW *
A terrifically tall tale, packaging the superhero action into compelling, punchy chapters that keep you reading. It's a fast, feisty read with characters that are skillfully drawn, assassinations, gunfights, physics bending motorcycle chases and a world you can't wait to hear more about. * SFX *
Full of action * THE SUN *
Brandon Sanderson was born in Nebraska in 1975. Since then he has written the Mistborn series, amongst others, become a NEW YORK TIMES bestselling author and been hailed as the natural successor to Robert Jordan. He lives in Utah.
GOR006262783
Steelheart by Brandon Sanderson
Brandon Sanderson
The Reckoners
Used - Very Good
Paperback
Orion Publishing Co
2014-09-25
400
057510404X
9780575104044
N/A
Book picture is for illustrative purposes only, actual binding, cover or edition may vary.
This is a used book - there is no escaping the fact it has been read by someone else and it will show signs of wear and previous use. Overall we expect it to be in very good condition, but if you are not entirely satisfied please get in touch with us.
Trustpilot