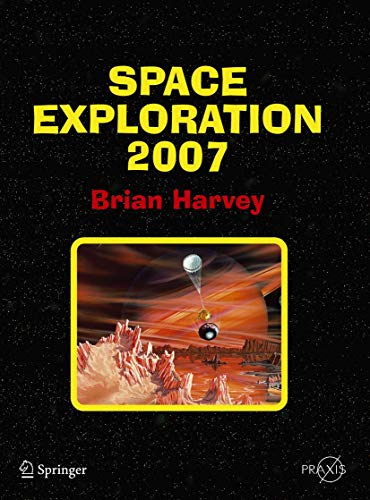 This book is the first regular space exploration annual. It provides an annual update on recent space launches, missions and results, to be published every year in September. It is written at an accessible level for both young and older space enthusiasts.

This book provides an annual update on recent space launches, missions and results. The annual, written for both young and older space enthusiasts, provides a regular, balanced review of all the world's major space programmes. It covers space exploration from a variety of angles: looking back at past missions, reviewing those currently under way and looking to those planned for the future. The ten invited contributions each year will cover a variety of topics within these areas. The book is for space enthusiasts from teens upwards through to professionals working in the worldwide space industry and journalists covering space issues.

"Space Exploration 2007, includes articles about building the International Space Station, results of the exploration of Mars, intercepting comets and asteroids, the latest data from space missions to Jupiter's moons, and more. With photographs on almost every page, the annual will interest space enthusiasts from teenagers through to professionals working in the worldwide space industry and journalists covering space issues."(EurekAlert!, October, 2006)

"At last a space book with a sense of humour! ... here we have a book for space enthusiasts of all ages. The collection of contemporary articles provide a useful 'end of year' summary on the kind of subjects you would expect ... . There are also useful charts and tables ... . Space Exploration 2007 is a great Christmas gift and promises to be a classic in the making." (Clive Simpson, Spaceflight, Vol. 49, January, 2007)

"This is the first in what is going to become an annual publication covering current events in space events in space exploration. Its large format an extensive use of color make it both attractive and informative, and should appeal to space enthusiasts of all ages. ... All chapters also include references for further reading, which is a nice touch." (Liftoff, Issue 238, 2007)

"It is clearly to design to appeal to the space enthusiast and most likely aimed at the Christmas market. ... the material in the book is pitched at a teen- or adult-level readership. ... the articles in the book are informative and generally well written, there are copious illustrations, and the price of the book is modest. I would say that this book is worth considering for the space junkie in your family." (Steve Bell, The Observatory, Vol. 27, 2008)

The Epic Journey Begins....- Building the International Space Station.- Arrival of the Red Planet.- Looking at Mercury....- Visiting Venus....- Europa's Ice Next . . ..- Exploring the Ringed Planet.- Secrets of a Cloudy Moon . . ..- Catching Fragments of Our Past....- A vision for Space Exploration....- ...Continuing a vision for Space Exploration.- Soyuz in the Jungle.- Return to the Moon.- In the footsteps of Soyuz.

GOR001260653
Space Exploration 2007 by Brian Harvey
Brian Harvey
Springer Praxis Books
Used - Very Good
Hardback
Springer-Verlag New York Inc.
2006-09-21
187
0387333304
9780387333304
N/A
Book picture is for illustrative purposes only, actual binding, cover or edition may vary.
This is a used book - there is no escaping the fact it has been read by someone else and it will show signs of wear and previous use. Overall we expect it to be in very good condition, but if you are not entirely satisfied please get in touch with us.