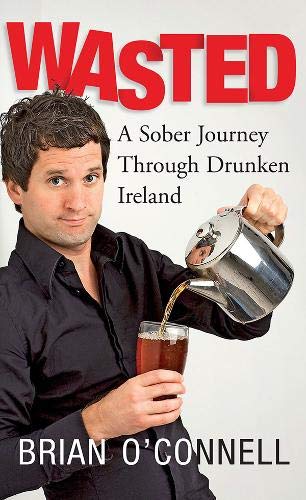 Wasted is an honest, unflinching, and humorous reflection on life as a problem drinker.

Wasted: A Sober Journey Through Drunken Ireland by Brian O'Connell

Now sober for almost five years, Brian sees himself out of synch with much of Irish society and finds Ireland an uncomfortable place in which to live. He explores both his and Ireland's fondness for the jar, by hanging out with daytime drinkers in a rural bar, getting the thoughts of boozy teenagers and hearing from those at the frontline of Ireland's drink culture.

Not afraid to poke fun at himself, our now sober thirty-something finds time to visit the Guinness Brewery, talk to government, and see how other European countries are coping with their drinking cultures. Along the way he chats with personalities who have had their own issues with alcohol, from ex-hurler John Leahy to comedian Des Bishop and actor Niall Toibin, to compare notes on a society on a seemingly endless bender.

It's a tale of ridicule and rehab, of insight and denial, casting a sober eye on contemporary Irish society and its liquid leanings. Think McCarthy's Bar without the bar.

Brian O'Connell's work as a journalist appears in the Irish Times, and several international publications, including the LA Times, New Statesman, Sydney Morning Herald and Australian Financial Review. In 27, he won the John Healy National Print Award for a feature in the Irish Times on natives returning to the Aran Islands. More recently, Brian reported from India on child trafficking, The Democratic Republic of Congo on gender violence and Mozambique on the effects of climate change. In 29, he will co-present a new traditional music series on RT 1 television, entitled The Reel Deal.

GOR001640796
Wasted: A Sober Journey Through Drunken Ireland by Brian O'Connell
Brian O'Connell
Used - Very Good
Paperback
Gill
2009-10-16
240
0717145999
9780717145997
N/A
Book picture is for illustrative purposes only, actual binding, cover or edition may vary.
This is a used book - there is no escaping the fact it has been read by someone else and it will show signs of wear and previous use. Overall we expect it to be in very good condition, but if you are not entirely satisfied please get in touch with us.