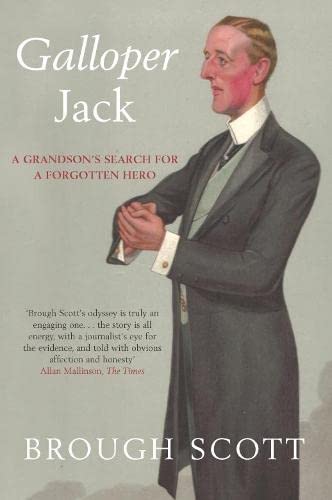 Out of Stock
$20.49
inc. GST
A personal and moving biography of a formidable soldier and misunderstood statesman
Very Good
Only 0 left

Galloper Jack: A Grandson's Search for a Forgotten Hero by Brough Scott

'Galloper' Jack Seely, Brough Scott's grandfather, was at the heart of some of the most important events of the first part of the twentieth century. His early life was one of adventure, sailing to the antipodes, saving the crew of a French ship wrecked off the coast of the Isle of Wight and later raising a squadron and joining the Boer War, where he was awarded the DSO for his bravery.

On his return to England he was elected Conservative MP for the Isle of Wight, but just like his close friend Winston Churchill, later crossed over to the Liberal party. There he became a member of Asquith's War Council and proved a success. However, disaster struck in the shape of the Curragh mutiny. Though Seely had little choice in his actions he was made a scapegoat. Forced to resign, Jack was sent to the Western Front and there made his name as a humane and innovative leader.

However, it was this experience that changed his entire world. His insistence that there should never be another Great War, led him to embrace appeasement without questioning the Nazi regime. It was a decision that would haunt him for the rest of his life. Written with honesty and wit, this is an exciting, unusual and thought-provoking biography of a man who has been unfairly treated by history.

`Brough Scott's odyssey is truly an engaging one. . . the story is all energy, with a journalist's eye for the evidence, and told with obvious affection and honesty' Allan Mallinson, The Times

Brough Scott is familiar to millions as the racing pundit for Channel Four. An ex-jockey he is now a sports writer and is one of the founders of the Racing Post. He lives in Surrey.

GOR000970406
Galloper Jack: A Grandson's Search for a Forgotten Hero by Brough Scott
Brough Scott
Used - Very Good
Paperback
Pan Macmillan
2004-03-19
416
0330491687
9780330491686
N/A
Book picture is for illustrative purposes only, actual binding, cover or edition may vary.
This is a used book - there is no escaping the fact it has been read by someone else and it will show signs of wear and previous use. Overall we expect it to be in very good condition, but if you are not entirely satisfied please get in touch with us.