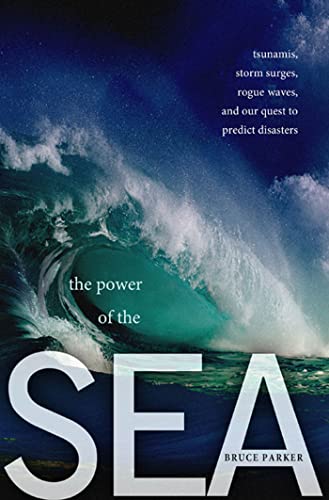 The Power of the Sea
by Bruce Parker

In Stock
$92.99
inc. GST
A spell-binding and heart-stopping narrative that reveals the amazing power of the oceans and explains for the first time how scientists have learned to predict the sea's destructive moments that can take the lives of millions.
Very Good
Only 1 left

The Power of the Sea Summary

The Power of the Sea: Tsunamis, Storm Surges, Rogue Waves, and Our Quest to Predict Disasters by Bruce Parker

Classics from Moby Dick to A Perfect Storm have sought to capture mankind's obsession with the might and the mystery of the sea. And the greatest minds for centuries, including Isaac Newton, Napoleon, and Benjamin Franklin, have worked to understand and predict when its next act of destruction will occur. The awesome power of the earth's oceans have been at the forefront of everyone's minds in recent years, from the 2004 Indian Ocean Tsunami (230,000 dead) to the devastation of New Orleans after Hurricane Katrina to the unknown consequences of the melting of thousands of glaciers as the Earth's temperature slowly rises. Bruce Parker, former Chief Scientist for the National Ocean Service, brings together the breathtaking history of man's relationship with the sea with the latest scientific breakthroughs to explore in this wide-sweeping, fascinating narrative: * Napoleon's realization about what happened to Moses in the Red Sea after his own narrow escape from it's dangerous tides * The important role the tides played in assuring the Allied victory on D-Day, and how a typhoon decided a key naval battle in the Pacific theater * How in 1970 the country of Bangladesh claimed it's independence following a deadly storm surge that claimed half a million lives * A 500-foot tsunami (the largest in recorded history) that carried three fishing boats from a quiet bay in Alaska in the 1950s to middle of the Pacific Ocean - and two men survived to tell the tale. * How a ten year old English girl saved the lives of hundreds during the 2004 Indian Ocean tsunami * How today's scientists are working to predict the sea's next move through a vast global array of oceanographic sensors - on buoys, on ships, on islands, along coasts, and on satellites that provide huge quantities of real-time data to scientists in the international community. This is a richly textured narrative that takes readers through over a thousand years of the ocean's uncompromising role in mankind's fate, gripping science readers, amateur oceanographers, and weather enthusiasts everywhere.

The Power of the Sea Reviews

"Mixes hair-raising descriptions of disasters with efforts to understand them... the author provides a lucid, original contribution to popular-science writing." --Kirkus Reviews

"... prediction is the focal point of Parker's narrative, and a lively, story-driven one it is. ... Riveting readers with analyses of catastrophes such as the 2004 Indian Ocean tsunami, Parker delivers science in dramatic and digestible form." --Booklist

"Anyone who appreciates the fact that the sea remains something we cannot control will love this book from Bruce Parker. You will come away with a better understanding of why the sea will leave us in awe till the end of time." --Jim Cantore, The Weather Channel

"I suggest you read The Power of the Sea, a fascinating exploration of the subject by Bruce Parker" --Andrew Revkin, Dot Earth blog, The New York Times

"Bruce Parker's The Power of the Sea is an engaging and essential history of science. It's also a terrific account of survival on our wild blue planet." --David Helvarg, author of Saved by the Sea: A Love Story with Fish

"The Power of the Sea presents the destructive nature of ocean waves in human terms. For me, the power of the Power of the Sea lies in the compelling personal stories that make the book immensely readable. From Napoleon's near death encounter with a raging Red Sea tide, to the vital importance of predicting tide and swell before the D-Day landings, to the individual acts of heroism during the tragic 2004 Indian Ocean tsunami, to the epic storm surges that continue to flood Bangladesh and Myanmar today, Parker never loses sight of the uneasy alliance between man and sea. All who ply or live near the sea should read this book. Be warned, you may never look at the ocean the same way again." --John Kretschmer, columnist for Sailing magazine and author of At The Mercy of the Sea

"Rarely does a book written by a practicing scientist grab you like this one. Intelligent, accurate, and accessible, ... read Bruce Parker's wonderful book." --Richard Ellis, author of The Empty Ocean and Tuna: Love, Death, and Mercury

"The Power of the Sea is the best book I have ever read about tsunamis, storm surges, or rogue waves. It dramatically demonstrates the need to better understand the awesome power of the sea if we are to save lives and property." --Jerry Schubel, President, Aquarium of the Pacific

"richly researched, eloquent ... a must-read for anyone interested in the environment. The power of the sea is palpable in Dr. Parker's treatment of a fascinating diversity of historically significant events." --Richard Spinrad, Vice President for Research, Oregon State University

"Bruce Parker has blended history and science into a book that clearly and often dramatically explains how and why the sea will affect their lives - now and in the future. This is a must-read for anyone who has ever been awed by the ocean." --Dan Basta, Director, NOAA Office of National Marine Sanctuaries.

"This is an engaging book filled with details and little-known facts that have been skillfully compiled and woven into interesting stories... entertaining while at the same time providing a wealth of information in an interesting manner. ... very worthwhile and rewarding to read. .... I heartily recommend this book to all who are interested in the sea and some of the secrets that it holds." --Charlie Finkl, Journal of Coastal Research

"his presentation of the human race's history of trying to unravel the mysteries of exactly what makes our oceans tick is, by turns, fascinating, enlightening, and sometimes pretty scary. Besides providing stark examples of the vicissitudes of the sea, which throws tsunamis and rogue waves at both sailors and land dwellers, Parker devotes much space to our attempts to predict its watery demeanour. The text is heavily footnoted, as befits a scientist and lecturer, but it never really departs the realm of readability, even when discussing global warming, El Nino, and weather predictions." --Martin Dunphy, The Georgia Straight [Straight.com]

"fascinating reading. ... the best aspect of The Power of the Sea ... is reserved for the two chapters Parker uses to detail the earthquake and resulting tsunami on December 26, 2004 in the Indian Ocean, which resulted in the loss of nearly 300,000 lives and whose effects were felt around the world. Vividly recreated, it is both amazing and heart wrenching. ... As the resulting tsunami traveled through the Indian Ocean, Parker graphically describes the effects. It makes for some difficult reading. ... The Power of the Sea is an accessible, entertaining, harrowing examination of some of the most powerful forces in nature. Parker writes in manner that makes the complex science of the oceans easily understood by everyone. He includes many anecdotes, livening up the text, which drive his points home. This is an excellent book for anyone interested in the oceans, looking for an understanding of tsunamis, storm surges, tides, and more." --Gregg Eldred, Planet Lotus

"A compelling portrayal of the awesome destruction that the sea can unleash, The Power of the Sea explains what mankind has learned from such disasters, and how we can reduce the loss of life in the future." --WindCheck magazine

"A vivid portrayal of sea disasters and the important role that the ocean has played in so many historic events. An illuminating scientific look at how we have learned to predict such disasters and what still needs to be done to safe guard us from future global calamities." --Curtis Ebbesmeyer, author of Flotsametrics and the Floating World

"Whether you love history, science or just want to know how the world shapes our lives, this is both an informative and enjoyable read." --Margaret Davidson, Director, NOAA Coastal Services Center

"any reader with an interest in the subject will appreciate Parker's expertise." --Publishers Weekly

"Parker's integration of theory with vivid descriptions of historical events sets this book in a class of its own .... I highly recommend 'The Power of the Sea' .... Whether you're a sailor, scientist, or history buff, there is something for everyone in this book" --Brian Shiro, Earth magazine

"This is a fascinating book from a scientist who appreciates history and uses human stories to breathe life into his study. He had me at the introduction, 'When the Sea Turns Against Us'." --Timothy J. Runyan, Sea History magazine

BRUCE PARKER is a world recognized expert in the oceans. He is former Chief Scientist of the National Ocean Service and occupied various posts in international organizations that study ocean behavior. He is presently Visiting Professor at the Centre for Maritime Systems at the Stevens Institute of Technology in New Jersey, USA. Among his awards are the U.S. Department of Commerce Gold Medal and the Commodore Cooper Medal from the International Hydrographic Organization. He lives in Virginia.

When the Sea Turns Against Us: Escaping its Fury through Prediction The Earliest Predictions for the Sea: The Tide The Moon, the Sun, and the Sea: The Tide Predictions for D-Day The Sea's Greatest Killer: Predicting Storm Surges Defending our Coasts: Flooded Cities Stormy Seas: Predicting Sea, Swell, and Surf 'Holes' in the Surface of the Sea: Rogue Waves The Sea's Response to an Unpredictable Earth: Trying to Predict Tsunamis December 26, 2004 (Part 1): Tragic Surprise in the Indian Ocean December 26, 2004 (Part 2): Learning from a Tragedy Predicting the Future - and Saving Lives: El Nino, Climate Change, and a Global Ocean Observing System Endnotes Acknowledgments

GOR005557250
The Power of the Sea: Tsunamis, Storm Surges, Rogue Waves, and Our Quest to Predict Disasters by Bruce Parker
Bruce Parker
Used - Very Good
Hardback
Palgrave Macmillan
2010-11-19
304
0230616372
9780230616370
N/A
Book picture is for illustrative purposes only, actual binding, cover or edition may vary.
This is a used book - there is no escaping the fact it has been read by someone else and it will show signs of wear and previous use. Overall we expect it to be in very good condition, but if you are not entirely satisfied please get in touch with us.