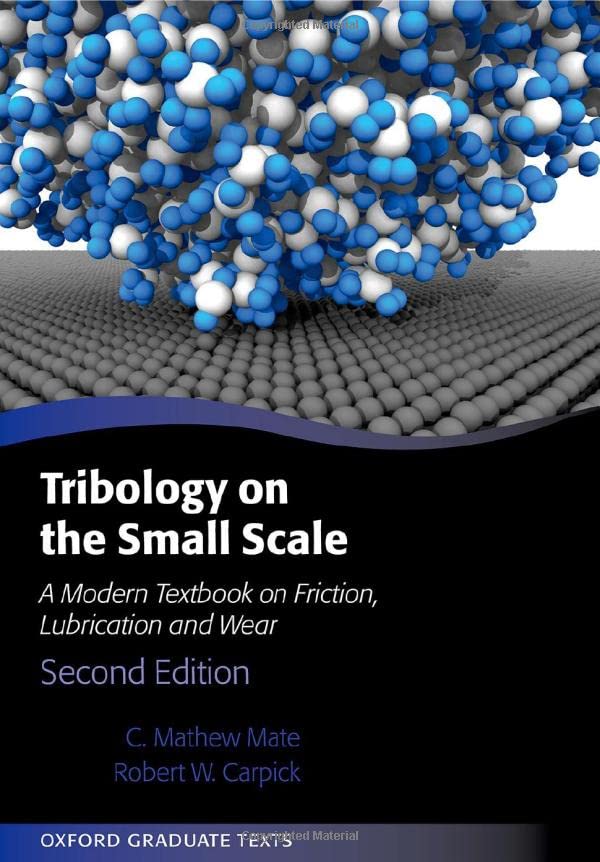 Friction, lubrication, adhesion, and wear are prevalent physical phenomena in everyday life and in many key technologies. This book explains how these tribological phenomena originate from atomistic and microscale physical phenomena and shows how this understanding can be used to solve macroscale tribology problems.

Friction, lubrication, adhesion, and wear are prevalent physical phenomena in everyday life and in many key technologies. This book incorporates a bottom-up approach to friction, lubrication, and wear into a versatile textbook on tribology. This is done by focusing on how these tribological phenomena occur on the small scale - the atomic to the micrometer scale - a field often called nanotribology. The book covers the microscopic origins of the common tribological concepts of roughness, elasticity, plasticity, friction coefficients, and wear coefficients. Some macroscale concepts (like elasticity) scale down well to the micro- and atomic-scale, while other macroscale concepts (like hydrodynamic lubrication) do not. In addition, this book also has chapters on topics not typically found in tribology texts: surface energy, surface forces, lubrication in confined spaces, and the atomistic origins of friction and wear. These chapters cover tribological concepts that become increasingly important at the small scale: capillary condensation, disjoining pressure, contact electrification, molecular slippage at interfaces, atomic scale stick-slip, and atomic bond breaking. Throughout the book, numerous examples are provided that show how a nanoscale understanding of tribological phenomena is essential to the proper engineering of important modern technologies such as MEMS, disk drives, and nanoimprinting. For the second edition, all the chapters have been revised and updated to incorporate the most recent advancements in nanoscale tribology. Another important enhancement to the second edition is the addition of problem sets at the end of each chapter.
Review from previous edition This book covers topics not typically found in Tribology texts emphasising how macroscopic tribological phenomena originate at the atomic and molecular level. * J. Paulo Davim, International Journal of Surface Science and Engineering *
Tribology on the Small Scale is an eminently readable book...I think the book is most useful to post-graduate research students and industrial researchers as a general initiator to the field of small-scale tribology. This community is significant and the book will serve a very useful purpose. * Tribology Letters *
The author has brought all the essential topics together and written a superb book, lively and fascinating. * Current Engineering Practice *
Mathew Mate is currently a Visiting Scholar at the Chemical Engineering Department at Stanford University. Prior to that, he work for 30 years in industry for IBM, Hitachi, and Western Digital. He is best known for his research into the molecular and atomic levels and origins of tribology (the study of friction, lubrication, and wear). He has also been extensively involved in improving disk drive tribology. In recognition of his pioneering contributions to the field of tribology, he was awarded the 2001 MRS Medal from the Materials Research Society and the 2012 International Award from the Society of Tribology and Lubrication Engineers. Robert Carpick, John Henry Towne Professor of Mechanical Engineering and Applied Mechanics at the University of Pennsylvania, studies nanotribology, nanomechanics, and scanning probes. He has received numerous awards include a NSF CAREER Award and the ASME Newkirk Award, and is a fellow of numerous societies, including the American Physical Society and the Society of Tribologists and Lubrication Engineers. He has authored 6 patents and over 170 peer-reviewed publications. Previously, he was a faculty member at the University of Wisconsin-Madison. He received his B.Sc. (University of Toronto) and his Ph.D. (University of California at Berkeley) both in Physics, and was a postdoc at Sandia National Laboratory.
1: Tribology 2: Surface roughness 3: Mechanical Properties of Solids and Real Area of Contact 4: Friction 5: Surface energy and capillary pressure 6: Surface forces derived from surface energies 7: Physical origins of surface forces 8: Measuring surface forces 9: Lubrication 10: Lubrication in tight spots 11: Atomistic origins of friction 12: Wear
NGR9780199609802
9780199609802
0199609802
Tribology on the Small Scale: A Modern Textbook on Friction, Lubrication, and Wear by C. Mathew Mate (Visiting Scholar, Visiting Scholar, Chemical Engineering Department, Stanford University)
C. Mathew Mate (Visiting Scholar, Visiting Scholar, Chemical Engineering Department, Stanford University)
Oxford Graduate Texts
New
Hardback
Oxford University Press
2019-08-30
448
N/A
Book picture is for illustrative purposes only, actual binding, cover or edition may vary.
This is a new book - be the first to read this copy. With untouched pages and a perfect binding, your brand new copy is ready to be opened for the first time
Trustpilot