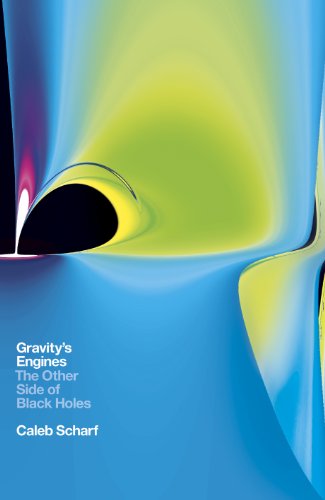 In Stock
$22.49
inc. GST
Traces the two hundred year history of our attempts to discover the nature of black holes. This title reveals how these giant black holes profoundly rearrange the cosmos that surrounds them, controlling the number of stars in the galaxies and, in turn, the entire universe.
Very Good Good
Only 2 left

Gravity's Engines: The Other Side of Black Holes by Caleb Scharf

We have long understood black holes to be the points at which the universe as we know it comes to an end - mysterious chasms so destructive and unforgiving that not even light can escape their deadly power. Recent research, however, has led to a cascade of new discoveries that have revealed an entirely new, and crucially important, side to black holes. Super-sized versions, often billions of times more massive than the Sun, lurk in every galaxy in the universe. And these chasms don't just vacuum up everything around them; they also spit out huge clouds of matter and energy. In Gravity's Engines, renowned astrophysicist Caleb Scharf reveals how these giant black holes profoundly rearrange the cosmos that surrounds them, controlling the number of stars in the galaxies and, in turn, the entire universe. With lucidity and elegance, Scharf traces the two hundred year history of our attempts to discover the nature of black holes, from an English academic turned clergyman in the late 1700's who first identified these 'dark stars' to Einstein and the great revolutions of relativity and quantum mechanics. Engaging with our deepest questions about our origins, he takes us on an intimate journey through our endlessly colourful universe, revealing how the cosmic capacity for life is ultimately governed by - and perhaps could not exist without - black holes.

A virtuosic history of the universe... [Scharf] serves as an appealing tour guide to the eerie, infinite corridors of the cosmos in which we reside -- Prospect
In Gravity's Engines, Caleb Scharf tells the mind-blowing story of 'supermassive' black holes, the true masters of the Universe. Black holes are smaller than the Solar System yet project their power across the cosmos, sculpting entire galaxies of stars. They might appear esoteric and remote, but as Scharf explains, life on Earth may have been utterly impossible without them * Marcus Chown, author of Quantum Theory Cannot Hurt You *
Caleb Scharf is a lively and eloquent writer as well as a fine scientist. Gravity's Engines is particularly welcome because it presents topics at the frontiers of our understanding which have not hitherto been presented so clearly to a general readership * Sir Martin Rees *
Mr. Scharf makes vivid the mind-boggling nature of the universe . . . [there are] bright beams of knowledge coming from this excellent book * Wall Street Journal *
Using rich language and a brilliant command of metaphor, [Scharf] takes on some of the most intricate topics in theoretical and observational astronomical research. He weaves a wonderfully detailed tapestry of what modern astronomy is all about, from the complexities of cosmic microwave background studies to the X-ray mapping of galaxy clusters -- Nature
Caleb Scharf's fun book takes you behind the scenes of the universe itself to see how the celestial heavyweights we call black holes help shape the cosmos * Sean Carroll, author of From Eternity to Here *

Caleb Scharf is the director of Columbia University's Astrobiology Center. He has written for New Scientist, Science, Nature, and more. He was born in England, and now lives in New York City.

GOR004941445
Gravity's Engines: The Other Side of Black Holes by Caleb Scharf
Caleb Scharf
Used - Very Good
Hardback
Penguin Books Ltd
2012-11-01
272
1846145333
9781846145339
N/A
Book picture is for illustrative purposes only, actual binding, cover or edition may vary.
This is a used book - there is no escaping the fact it has been read by someone else and it will show signs of wear and previous use. Overall we expect it to be in very good condition, but if you are not entirely satisfied please get in touch with us.