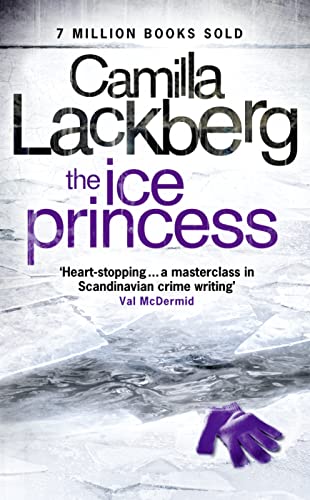 The Ice Princess
by Camilla Lackberg

Returning to her hometown after the funeral of her parents, writer Erica Falck finds a community on the brink of tragedy. The death of her childhood friend, Alex, is just the beginning. Her wrists slashed, her body frozen in an ice cold bath, it seems that she has taken her own life.

Erica conceives a memoir about the beautiful but remote Alex, one that will answer questions about their lost friendship. While her interest grows to an obsession, local detective Patrik Hedstrom is following his own suspicions about the case. But it is only when they start working together that the truth begins to emerge about the small town with a deeply disturbing past.

Praise for The Ice Princess:

`Heart-stopping and heart-warming, `The Ice Princess' is a masterclass in Scandinavian crime writing' Val McDermid

`Camilla Lackberg is a more than welcome addition to the growing ranks of Scandinavian crime writers translated into English. With its sharp emotional nuances and psychological insight, `The Ice Princess' builds in suspense as the author turns her clear eye on the buried secrets and contemporary relationships of a small, isolated community. I predict that Fjallbacka and its crimes and people will soon be as poplular here as they are in her native Sweden' Peter Robinson

`Has a brooding quality redolent of its barren Swedish landscapes... intriguing and not a little disturbing' Irish Times

`Chilly, deceptive and lucid, just like the icy environment it describes' Literary Review

European reviews for The Ice Princess:

`The plot is simply superb, in an almost Agatha Christie-style. The cast of characters emerge with clarity and feel quite genuine... secrets come out in the 331-page book that bring about more things than murder. I read it in one go. A book that you can't put down' Sala Allehanda

`Camilla Lackberg is a Crime Queen' Bild am Sontag

'This is unputdownable. Lackberg keeps the thrills coming until the very end' Viva

'Camilla Lackberg was voted Swedish Writer of the Year for 2005. Bring on the next one!' Crimezone.nl

`An amazingly mature, well thought-out and exciting criminal novel... Lackberg stands out as the best first-time offender of the year' Jury

GOR003251685
The Ice Princess (Patrik Hedstrom and Erica Falck, Book 1) by Camilla Lackberg
Camilla Lackberg
Patrik Hedstrom and Erica Falck
Used - Very Good
Paperback
HarperCollins Publishers
2011-03-03
400
0007421567
9780007421565
N/A
Book picture is for illustrative purposes only, actual binding, cover or edition may vary.
This is a used book - there is no escaping the fact it has been read by someone else and it will show signs of wear and previous use. Overall we expect it to be in very good condition, but if you are not entirely satisfied please get in touch with us.