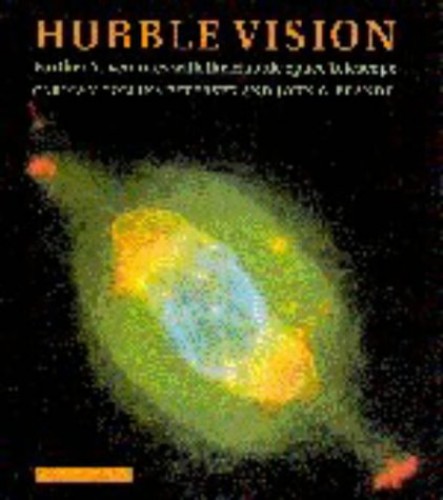 In Stock
$36.99
inc. GST
The first edition of Hubble Vision became an international bestseller and won world-wide, critical acclaim. This eagerly awaited second edition is the most comprehensive, most authoritative and best illustrated popular book available on the Hubble Space Telescope.
Very Good
Only 1 left

The first edition of Hubble Vision became an international bestseller and won world-wide, critical acclaim. This eagerly awaited second edition is the most comprehensive, most authoritative and best illustrated popular book available on the Hubble Space Telescope. It provides a magnificent portfolio of the latest and greatest images from the HST, woven together with a lucid text explaining the most exciting discoveries and setting them in the context of our current understanding in astronomy. This second edition has been completely revised, updated and expanded to include all the latest astronomical discoveries - from supernovae and protostars to gravitational lensing, black holes and the early Universe. It is now even better illustrated, with nearly 25% more figures, and more than 100 entirely new. The unique combination of authors - an award-winning science writer and a key scientist involved in the development of the mission - ensure that the text is both engaging and authoritative. Hubble Vision offers a view of the Universe as never seen before. It will capture the imagination of all those interested in the astronomical quest of understanding our Universe - from high-school students to general readers and amateur astronomers.

' ... the most superb encapsulation of modern astronomy I have ever come across ... This is heady stuff indeed. ...This is a book for us all ...The authors, HST and CUP have created a landmark popular book for astronomy.' Derek McNally, Astronomy and Geophysics
' ... the eagerly awaited second edition ... you will find one of the most comprehensive, authoritative, and expertly illustrated popular books about the HST available ... serves to expand public access to the wonders and treasures held within Hubble's vault of images. The magnificent collection of latest and greatest Hubble images is complemented by a clear and fascinating text ... the pictures alone are enough to make this a must-have.' Astronomy Magazine
'It is a most beautiful book and should at the very least belong to every school library ... a truly excellent book.' Astronomy Now
'beautifully illustrated ... Hubble Vision is exactly the type of astronomy book that first captured my imagination as a child: large, glossy pages that offer a stunning tour of the cosmos in pictures. It allows us to ponder and marvel at celestial sights previously hidden ... an engaging and informative introduction to astronomy.' New York Times
' ... a good book for schools and libraries with a lot of thoughtful educational material, held together by the stream of classy images.' N. R. Tanvir, The Observatory
'This second edition is probably one of the most comprehensive, authoritative and best illustrated popular books currently available on the Hubble Space Telescope. It contains a magnificant portfolio of the latest and best images from the HST, together with a lucid text which explains some of the most exciting discoveries and places them in the context of our current understandings in astronomy. This new edition has been completely revised, updated and expanded to include many of the latest discoveries - from supernovae and protostars to gravitational lensing, balck holes and the early universe. It has jet more illustrations, with the addition of more than 100 new images. The text provides sufficient scientific background to enable readers to appreciate the remarkable discoveries being made which are providing a fascinating new insight into the universe.' Spaceflight
'This book is a stunningly spectacular and visual work of art that will delight the beginner and expert alike. The authors enthusiasm for science and exploration shines through the text making the book a pleasant read. This book is not just a once-off read but it will be dipped into time and time again.' James Maher, Astronomy and Space
'A rich trove of images with explanatory text highlights some of Hubble's greatest hits. The well crafted narrative challenges readers to comprehend a wide variety of subjects studied with Hubble.' Astronomy Magazine

Preface; 1. Hubble Space Telescope and the universe; 2. HST and the solar system; 3. Stars and the interstellar medium; 4. Galaxies; 5. Cosmology; 6. The once and future space telescope; Glossary; References; Index.

GOR003254504
Hubble Vision: Further Adventures with the Hubble Space Telescope by Carolyn Collins Petersen
Carolyn Collins Petersen
Used - Very Good
Hardback
Cambridge University Press
1998-10-28
240
0521592917
9780521592918
N/A
Book picture is for illustrative purposes only, actual binding, cover or edition may vary.
This is a used book - there is no escaping the fact it has been read by someone else and it will show signs of wear and previous use. Overall we expect it to be in very good condition, but if you are not entirely satisfied please get in touch with us.